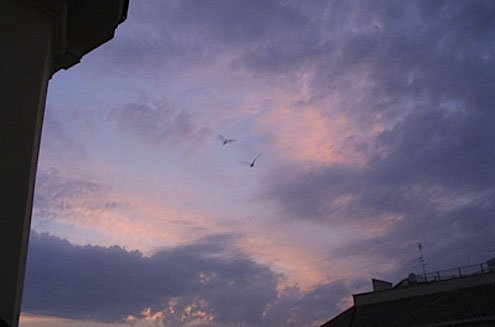 ou cannot have moist lips in the world of birds. You must dry them to make the sound. You must first blow air through them, puckering, as if exhaling hard into a balloon to a child in a park. As if red. As if the child smiles.

I’ve been doing it for years, and the birds listen. The friction does it, the dry flirtation of pitch, like a squeal. They cannot resist. They hear something we cannot even imagine.

My mother taught me the technique. She practiced to the gulls, to me. We made the sound together. The birds came in curious droves.

She wore a cocktail dress.

Birds, she said, do not change.

You can do this in 50 years. They will always come.

You cannot have moist lips in the world. People misunderstand. Lascivious is the word. They imagine movie clips where construction workers whistle at passing girls. Betty Boop. The Empire State Building. Penn Station. Lifeguards on a Delaware beach with baggy trunks.

People misunderstand, and then, under the boardwalk, you see them through the cracks, a boy and a girl. Wood expands near salt. The sea does that. The winter expands the wood, the salt opens its pores. You find the same opening, because boys seek them out. Betty Boop. Lascivious is the word, but you can’t spell it.

Part of the air is the world of birds. I watch them diligently. I’ve been doing it for years, practicing how to memorize them. Swifts, swallows, crow, pigeon. Late spring and summer brings laughing gulls. The crow, by contrast, are winter birds. They park in cold air. They are cynical about sounds. They cannot eat the squeal. So they flee.

You can do it for 50 years and they will not stop fleeing. The same sound, made by your son, will cause the same effect. This is what you should know about the future. But people misunderstand. That old man, the oldest one, he was a lifeguard once. Believe me. Red trunks. Trim.

But your son doesn’t listen.

Part of the birds are a stretch of beak. In a membrane, pried open, is a fish. Part of the beak, quivering, is wrapping for a skeleton. All this flies. Imagine it. Stitch a membrane taught over cartilage and you get a wing. Air is what you put beneath it, like a present.

This is flight, at least for a boy. I began watching when I was eight. The terrace, the one I call home, was always predisposed to memory.

You cannot have a world, not one anyone believes in, when the birds are speaking.

No one believes you. People misunderstand.

They mistake your laughter for cawing. They call you a child.

But take my word on the technique: Dry lips, even chapped, even painful; the birds think they’re on to something. They’ve never seen you before. They’ve never heard you. How else to make another species curious? In the world of birds you are a sound, an alien. They swoop down, come closer. Betty Boop. The Empire State Building.

Imagine an old gull over a Delaware beach. How long until it reaches Rome?

My mother asked this, “That bird. Was it in America? How did it reach here? Did it fly across the ocean?”

Ask the same question for 50 years — your mother, your son, your daughter — and the birds rotate around it infinitely. They come for the sound. They don’t know when you began, what you feel. They don’t care. The same sound causes the same effect.

You cannot be dry. I’ll confess that much. Lascivious is the word. You cannot have people misunderstand too often or they’ll just walk away. It’s a thing about the species. They see you as fanciful. That squeal you make, for them, is infantile. So they flee.

It’s the moist lips we focus on. Under the cocktail dress, under the boardwalk. It is, we assume, what must matter most. The most vital friction is flirtation.

But it’s not that way in the world of birds. They’ll listen to what they do not understand because you’re on to something. You’ve made them curious. You can do this in 50 years. In 100. They pay attention.

Stitch a membrane taught over cartilage and you get a wing. That’s what’s up there, propelled. Instinct is our faith, they declare, and we’ll get back to you. Again and again. In the same form. That’s what they seem to say, and what they do, by evening — in constant and probing droves — from up here.