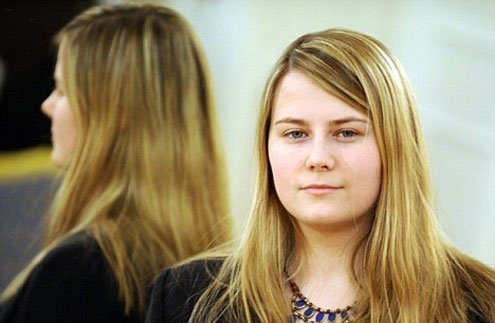 Natascha Kampusch: Held in a basement for eight years.
L

ast January it was announced that a film about Natascha Kampusch’s life was halted after its producer Bernd Eichinger died of a heart attack. Kampusch, the young Austrian woman whose image flooded the international press in 2006 after eight years of imprisonment in a basement dungeon, was rumored to be portrayed by either Kate Winslet or Scarlett Johansson.

“I want it to be the Natascha Kampusch movie, not the Kate Winslet movie,” Kampusch insisted. That Kampusch wants control over her own cinematic image is no surprise given the inconceivable psychological complexity of her story. More thought-provoking is how Kampusch will feel when she has to adjust to the colossal process of movie production if the film is ever green lighted.

What is it like to be present for the making your own biographic film? My suspicion is that it’s as perplexing and awkward as being present for your funeral. Committing a human’s story to the silver screen is not unlike death. It defines a life’s beginning and end.

The people who claim to know the dead come forward to reconstruct their life through a distorted, convex lens of memories and incantations. An elixir of flashbacks and denial distill a person’s reality into that perfect tale that tells us less about the person in question and more about how we, the viewing public, wish to memorialize them.

Thus, making a film about a dead person is an easy way out for filmmakers. Unlike Kampusch, legendary soul crooner Sam Cooke — who was shot and killed in 1964 at age 33 — won’t be present for the making of his biopic that was announced in March. Sources confirm it will be a roughly two-hour abbreviation of Peter Guralnick’s biography “Dream Boogie: The Triumph of Sam Cooke.” In other words, a Xerox copy of a Xerox copy of a life. All the screenwriters have to do legally to make the movie happen is purchase “Life Rights” from the deceased’s heirs. Cooke, tragically, has no say.

Living film subjects must negotiate other hazards. Kampusch refuses to discuss if a sexual relationship developed between herself and her kidnapper Wolfgang Priklopil. “I want to preserve a last tiny corner of privacy,” she said. That Kampusch suffered Stockholm Syndrome — sympathy for one’s captor — is also arguable, as she was said to weep “inconsolably” when informed that Priklopil died throwing himself in front of a train the day of her escape.

I don’t doubt that Kampusch thinks there’s more to her life than sexual horror stories and emotional irrationality. Hence her refusal to let the film be anything more than an honest retelling. But damsels in distress titillate the public more than damsels in control. The less say Kampusch has in the film, the more likely it is to be simplistic provocation, a mere Hollywood “Kate Winslet movie.”

I think about how gritty Los Angeles poet and alcoholic extraordinaire Charles Bukowski must have felt when French-Swiss Barbet Schroeder directed Bukowski’s autobiographical screenplay, “Barfly” (1987). He lacked Kampusch’s star power but was given an uncanny authority over film production compared to most Hollywood screenwriters. Schroeder would consult Bukowski before changing so much as a single line of dialogue.

The trouble was actor Mickey Rourke’s eccentric portrayal of Bukowski’s alter ego Henry Chinaski. For Buk, Rourke was just too over the top, too whimsical to be a worthy doppelganger. To achieve the look of a drunk, Rourke greased his hair with what might as well be Crisco. His five o’clock shadow was fast by a few hours, and when he walked he’d lurch sideways like an awkward stick bug after too many shots of Maker’s Mark.

Exaggeration took precedence over accuracy. That Rourke shouted his lines (“To all my friiiiiiiends!”), dispensed with the appearance of bathing, and conveyed more foolishness than poesy, left Bukowski ambivalent (he was in fact a bit more pulled together than he’s given credit for). But if viewers can set aside their bias for authenticity — whatever that is — they’ll find that the charm of Rourke’s strong if childlike performance is that it confers levity to an otherwise brutal story. Were it not for those strange moments of bright whimsy, we’d forget that the Henry Chinaski who picks bar fights and dons blood-stained shirts is the same man who wrote lines like these:

“in the sun and in the rain

pain is a flower

blooming all the time”

Then again, Bukowski never really wanted to live up to Bukowski. The words “Don’t Try,” adorn his tombstone (he died in 1994). There’s no question he cared far less about the tarnishing of his cinematic image than Kampusch, who as a sensationalized “victim” has a lot more to lose in the public eye than a poetry-writing boozer.

Still, Bukowski was a good sport. He made a brief cameo in the film: seated at the bar, no lines. When “Barfly” was submitted to the Cannes Film Festival, Bukowski completed his promotional duties and wrote a glowing endorsement.

He later panned Rourke’s performance in the 2003 biographic documentary, “Born Into This,” calling it “mis-done.”