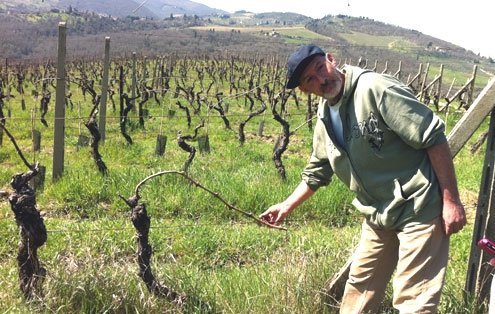 hat is “Biodynamic” wine? Is it “hippie juice,” a cousin to the tasteless, grainy crackers on health store racks? Or a marketing ploy to overcharge “environmentally conscious” wine drinkers?

The answer is neither.

Though biodynamic production doesn’t guarantee high quality, I’ve recently discovered a number of fine wines made according to the biodynamic principles that Austrian philosopher Rudolf Steiner outlined in a series of lectures given in 1924, the year before his death. He stressed two basic concepts: First, the interdependence of all living things; second, the Earth’s dynamic relationship with the energy of the cosmos.

Biodynamic farmers stress the importance of nurturing and balance. They seek harmony from the terrestrial: soil, plants, and living things; and the solar: sun, moon, planets and stars.

I recently visited Castello dei Rampolla in the heart of Chianti Classico where Luca di Napoli Rampolla and his sister Maurizia began making biodynamic wines in 1994 on land the family has owned since the 18th century. The vineyard is located on a picturesque southwest-facing hillside known as the “conca d’oro” (the golden shell).

For Luca, biodynamics underlies all day-to-day life. “Human reality is filled with mystery,” he says. “We are sensitive to ‘invisible matter’ like emotions, thoughts, and dreams. Plants are sensitive to invisible forms of energy, too, like gravity and magnetism.”

Vines are a player in the larger process. As the moon makes its elliptical path around the Earth, its gravitational pull varies — stronger when close to the Earth, weaker when it is at its furthest point. “This means it’s best to do planting or things having to do with plant roots when the gravitational force is strong and to harvest when the force is weakest.”

The rites of biodynamic farming can be fascinating. Luca buries a cow horn full of manure at the fall equinox and digs it up in spring. This manure, which he describes as full of “earthy influences,” is then mixed with “chaotic” water — produced from the energy of a vortex — and sprayed on the earth around the vines (preferably when the moon is in a “root” sign like Taurus). Luca has built a special basin that induces chaotic water flow through a double vortex.

Though biodynamic practices are precise, they’re applied with sensitivity based on the demands of each growing season and the challenges posed by each part of the vineyard. The process allows for no “correcting”: namely, no added yeasts for fermentation, no filtration, no temperature controls, and no toasted oak barrels. The grapes must be “harmonious” when they arrive in the cellar.

Castello dei Rampolla is best known for its Bordeaux-style Super Tuscans: Sanmarco-IGT (€35-40: 15 percent sangiovese and 85 percent cabernet sauvignon) and a “cru” from a specific vineyard and Vigna d’Aleco IGT (€50 and up: cabernet sauvignon and petit verdot).

But it’s spring and time for whites. The day I visited was warm and Luca opened a bottle of Trebianco IGT (€15: chardonnay, traminer and sauvignon blanc) under the shade of cypress trees in front of the 17th century house. The wine, a dry white, was a striking amber color, more typical of a sweet wine, though it didn’t taste sweet (the better-known version is a late harvest dessert wine). It sparkled with acidity, with an amazing complexity of flower and fruit flavors.

For those of you interested in sampling the biodynamic experience, here are some notable whites:

— Gravner Ribolla Gialla IGT (€50+: 100 percent ribolla gialla) and Gravner Breg Anfora (€40-45: a blend of sauvignon blanc, chardonnay, pinot grigio and riesling italico) from Oslavia in Friuli-Venezia Giulia. Josko Gravner researched winemaking as it believed to have existed 5,000 years ago and ferments and ages his wine clay amphorae. His wines are structured, with amazing acidity, which makes them improve significantly with age. I recently opened the 2002 Breg for a dinner of grilled tuna. It was still “young” and had remarkable freshness and complexity.

— Movia Sauvignon Blanc and Movia Pinot Grigio (€18-20). Ales Kristancic has made biodynamic wines for two decades on land that has been in his family since 1820. Though his address is Slovenian, his vineyards straddle the Italian border. You haven’t tasted sauvignon blanc or pinot grigio until you try Movia. His bear almost no relation to others by the same name. They’re denser, more complex, with a certain wildness that comes from the land.

— Foradori Fontasanta Nosiola Anfora (€22-25) is a dry wine made 100 percent from a native grape of Trento: nosiola. While most white wines are separated immediately from the skins, this wine is left “on the skins” in clay amphorae for six months. It was first released in 2009

— Porta del Vento (€12-15) is produced from cataratto vines grown close to the earth with traditional “alberello” plantings (each vine looks like a small bonsai tree). On hillside vineyards located about 30 kilometers from the Mediterranean shore south of Palermo, these vines soak up minerality from the soil, the saltiness of the sea air, the freshness of nearby citrus trees, and the warmth of the Sicilian sun.