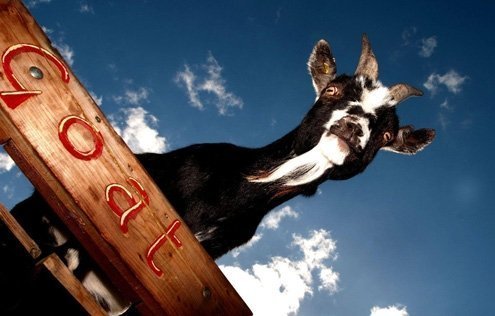 First, check for beady eyes; then try to make it to the car.
A

s a person who works with both children and animals, I might be described as someone who’s very good at shooting themselves in the foot. Honestly, though, children are a piece of cake compared to livestock.

Livestock farming is rarely about tending to straightforward animals, if there are such things. Large ones tend to be willful and rarely keen on doing what you might have in mind. Some can be cajoled with buckets of food or coaxed with tasty morsels but others just won’t play along. This means being organized and staying a step ahead of all potential eventualities at all times.

I confess we’ve had to learn about animal behavior hard way. We’ve had our Italian farm for years and we still don’t always get it right. Our first disaster was with goats.

I very rarely give unsolicited advice but there are times when experience confers insight you feel compelled to share with the world. Your humanitarian side tells you it would be wrong to keep silent.

So I urge you to take heed to what follows.

If you see your partner coming home with two goats that he’s bought in a pathetic attempt to ingratiate himself with the neighbors, immediately bolt the door, turn out the lights and refuse all contact until he promises to take them back.

If that doesn’t work, move out.

He’ll be happy enough playing with his amusing new pets as they trash the house, the garden and butt any other unhappy animals in the vicinity. He’ll just chuckle as they leap gracefully onto the table while he’s trying to eat lunch in the garden. He’ll smile ruefully as they unload two liters of piss into your sofa. You won’t need to care about any of this because you you’ll be gone. Being stuck in a tent without plumbing and electricity is preferable to being stuck in a place where goats are present.

Unfortunately, the children and I had to persevere with the goats. Give us credit: we tried. We took them for walks and fed them treats but we never really bonded. While my husband found the way they followed you or walked in front of you endearing, we really didn’t (being tripped isn’t endearing). But the appearance of a Billy goat, a “thoughtful gift” from the neighbor, pushed things from bad to worse.

Yes, male kid goats can be fun when they’re very small. But they soon turn aggressive. They also smell to high heaven. This one was no exception.

Crossing the yard with the children had to be planned like a military maneuver since he’d come at you from any direction. If you took your eye off him for a second he’d put his head down and charge. First, we had to establish his whereabouts, after which we’d fan out so that one of us could keep a lookout for the flash of his demonic yellow eyes. Advanced planning and defensive tactics were the only way to get to the car safely. Fortunately, one fateful day Woody, as we unaffectionately called him, went too far: he literally bit the hand that fed him — my husband’s, who conceded he had to go.

Fate played a part in ridding us of the original two. A nearby shepherd brought his flock of sheep to graze our land and our twosome was soon assimilated into his madding crowd. After week or so it was time for him to move on to greener pasture, and the children and I gleefully waved off Doris and Agnes with their braying assembly of new friends. We then remained very quiet on the subject until we were sure that they were too far off to reclaim.

If only the shepherd hadn’t noticed. He was contrite and promised my husband that any newborn kids would be delivered to our doorstep. So we’ll be moving shortly.