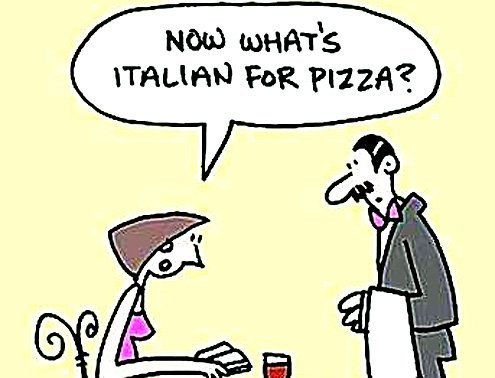 When in Rome, make an effort
I

admit to being baffled by the concept of bilingualism. That is, having acquired a second language decidedly late in life, I’m disconcerted by those who congratulate me on my in Italian. Because linguistic “fluency” for some of my friends means efficiency in ordering a bruschetta without having to mouth the syllables directly off the menu: bru-SHE-tta.

I am not bilingual. I studied my gluteus maximus off to be able to speak Italian without sounding like a boob, and am not entirely sure I’ve yet succeeded. There is still so much that troubles me about the language. I still get my subjunctive verbs wrong on a daily basis. I say things that, in English, would make me (and the rest of my table) howl with laughter. When I’m sleepy I lose the ability to roll my r’s, sounding like I have a rubber nipple lodged in my mouth. And these are glaring mistakes, mind you. But I’m still learning the language after 10 years. Yes, learning.

Yet I have friends who have lived in Italy as long, or longer, than I have who are still earnestly troubled by ordering food in Italian. “Um,” they fumble, “uh, un pizza con cipolli por favor? E un birra piccolo. Grazzi.”

This is an abomination. After one week in a new country, this is making a concentrated effort to speak the language. But after five years of museums, day trips, eating out twice a week and an endless succession of Italian-language partners, you are only embarrassing yourself. Worse are the excuses for such behavior.

“I don’t have any Italians in my family tree; it’s just not in my blood.”

“I only hang out with Americans.”

“I thought I could learn by osmosis.”

“It’s too late in life to learn a new language.”

I suppose I am to blame. I have been condoning this willful ignorance for years. Every so often I’ll say things like, “Hey, did you ever think of taking a few supplementary lessons?” The answer is invariably, “Who has time to study?”

I should be saying things like, “You sound like a chimp every time we go out to dinner. When you decide to beef up on your language skills, call me.”

The truth is these friends of mine are terrified of sounding unintelligent. After all, they are educated people, self-conscious enough to worry about saving face in public. At the core of their unwillingness is — as my friend Ron put it recently — the sense that time has expired in the language-learning hourglass.

Yet it can be incredibly easy, I told him, because the basics are already hard-wired in you from years of passive immersion in Italian life. This is an excellent start by any measure. All you have to do is not mind speaking like a fifth-grader for an indefinite period of time. The most frustrating thing about a new language is the inability to express complicated ideas with a limited vocabulary, all those profound thoughts that emanate from an over-practiced Anglophone brain.

But this shouldn’t be a problem, as most people do not pass their days lecturing on globalization or Dante. In fact, this is where the fun starts. What a feeling of mastery in being able to read the newspaper! It’s like acquiring superpowers; you find you are capable of things you never thought possible, and you don’t even have to put on a ridiculous leotard. In short, language-ability is power. It is the difference between cooking a three-course meal for your fiancee’s birthday and dragging her to McDonald’s because you can’t figure out how the stovetop works.

Someone once wrote that learning a new language is like discovering a second self. Ultimately, this is the payoff for all the hard work: self-knowledge. It can be stunning to meet yourself in an enchanted wood, like some Arthurian knight on a quest for the secret goblet. The goblet, in our case, is the Italian language. Every bird in the forest goes by a different name. It’s like being a child all over again, only this time you are fully conscious and awake, watching yourself grow up. And this is a very humbling experience.

I am not bilingual. I know truly bilingual people and I envy them. They can swim back and forth between languages like flipping the proverbial light switch. They have no trouble coming up with slang equivalents for “eat my shorts” or “take a hike”. They are a wonder of nature, endowed with extraordinary dexterity of tongue. I wish I were like them. I have been speaking Italian for years, unaware of the most glaring mistakes until they were pointed out to me.

But life goes on. There are more important things than worrying about sounding moronic in public. And, truth be told, most people don’t care. Italians are happy if you just make an effort, even if you haplessly blurt bru-shetta at a smirking waiter.