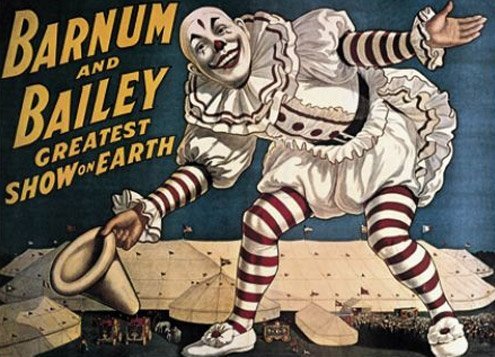 Welcome to the politics of noise, and above to entertainment at all costs.
I

was a Boy Scout in Washington, D.C. at the height of the Vietnam War when any kind of institutional belonging was seen as conformity, and conformity as ratification of adult choices, which included what many saw an illegal and immoral war. This concerned me, but only up to a point. Of more immediate importance was acquiring two difficult merit badges, since both were necessary to my advancement. The badges went by sincere but clunky names: Citizenship in the Home and Citizenship in the Nation.

The first, about home, focused on my membership in my family and all that rotated around it. Did I do chores? Did I answer responsibly to my parents? Had I helped in neighborhood projects? Was I forthcoming and polite to those around me? Could I be counted on? Was I accountable for my own actions?

The second, about nation, involved knowing the relationship between government and governed; between constitutional aims and daily realities; between seeking change and obtaining it, as in how to introduce and pass new laws. It also required understanding free speech, civic responsibility and dissent. If citizenship allowed for debate and criticism, and even defiance — which it did, at a price — it also placed a premium on collegiality and compromise.

As outlined by the badges, civics both at home and in the nation prized level-headedness and an above-the-fray view of the bigger picture, discouraging emotionalism and hormonal surges — hence the aphorisms “sleep on it” and “look before you leap.” Passionate views alone didn’t confer legitimacy. Restraint avoided unnecessary hostility and paralysis. Social coherence depended on a willingness to entertain the existence of many positions without lapsing into partisan intolerance or self-righteousness. A binding vote would eventually determine the course of action.

I mention my Boy Scout training in the context of the Vietnam War, because after my merit badge days I turned against the war, writing impassioned editorials for my high school newspaper and arguing with fellow students about the Richard Nixon presidency, which would end ignominiously for other reasons. But when civility was at risk, my merit badges kicked in. I knew I couldn’t impose my own “rightness” simply because I believed it. I could only argue and persuade, and live with the results, as a critic if necessary.

The merit badge story has relevance as the United States, bothered by a bitter budget crisis, and Italy, undone by an aging leader’s vanity, show signs of definitively breaking away from a compromise-oriented values system. The merit badge membrane was a centerpiece of postwar American propaganda that tied the common good to cooperation and negotiation, in part because of nuclear fears. It gave government and its representatives the responsibility for composure, exporting the system to Western Europe as part of the anti-Communist crusade. Emotionalism was filtered it through optimism and idealism to give restraint a luster and exalt it, against the grain, as the most mature and noble of responses.

It is that notion of noble restraint, and the intrinsic value of respectfulness, that is losing traction. The freewheeling early 21st-century, like the similarly freewheeling opening of the century before it, has chosen to view modernism as chance to sleep on nothing and leap before looking. While early 20th-century vanities were national, producing “wronged” states and two world wars, those of the 21st-century are more rudimentary. Decorum and modesty have been decimeated as daily social requirements, with political behavior as a kind of vaudeville all can follow or scorn at will.

In Italy, where politics has never known a volume dial, a former prime minister is working to engineer the collapse of yet another fragile government largely because he’s enraged at convictions he considers unfair (he will fail). He considers himself persecuted and seeks to make a point. His allies and enemies have all lined up at vulgarity’s door, transforming civil debate into a molasses of insults built to suit sound bite culture and even louder internet debate.

Compromise is not only irrelevant but a sign of weakness. The Italian scene has the feel of a throbbing 1990s rave. Even the country’s leading dissenter, a comedian and renegade, is the sum of his fantastic insults.

Though Italy has a poor political and civic reputation, its maligned ruling class has shown gumption at times. Christian Democrats and Communists successfully coexisted in the 1970s thanks to insider trading and arrangements that, while unsavory to some, kept democratic government intact in the face of terrorist violence intended to provoke an authoritarian response that never came. The value of decorousness put wordplay and irony ahead of insults.

Post-Communist candor and the onslaught of reality television predictably overturned caution and focused on cash. Cometh the online world: It egged on and transmitted a bewitched and changing planet’s collective growl. A low-boil World War III in a bottle and proudly untouched by the annoyances of civics and ethics, web expression suited one idea of “perfect” freedom. It was unfettered and therefore honest, completely reckless and therefore true. Its global raving pushed discourse toward uncommonly loud registers.

Discarding its hard-earned postwar merit badges, the United States, which technically brilliant, rushed headlong into a noisy Latin phase in which patriotism was mistaken with citizenship. Diplomacy became appeasement, which to some was little more than the act of not making their views known. The U.S. government shutdown — the first since the ugly 1990s — is the result of inter-party acrimony of unprecedented squalor. Self-righteousness, an addictive rush, has prevailed over political common sense largely because common sense is lacking, and excitement more desirable.

Peacetime, which is to say the lack of global war, encourages bored nations to create their own crises. They corrosively masticate on their own doubts whether the subject religion or health care. Assertions of “rightness” bolster a newly tailored civic physics that reflects neither citizenship nor the common good but cherishes renegade blocs simply for their passion. The pattern is in keeping with Italy’s divisive political model of party “currents,” which led to 50 governments in 50 years. The “rightness” insurgency — imbued with its own sense of nobility — all but overturns Citizenship in the Nation precepts.

But narcissism doesn’t suit democracy. Recklessness remains reckless. Crass is crass, even if few know to recognize it. In reality the American shutdown is based largely on one bloc’s dislike for one piece of legislation, and for its loathing of a sitting president. It has no upside but the thrill of its own rush, which speaks sadly of citizenship in both home and nation. A deal will be brokered of course, but not before badges take another battering.

Some insist, perhaps rightly so, that visions of a good deed, Boy Scout state are a boring anachronism and that instantaneity hinges instead on political warfare and Latin-style emotionalism. They insist conflict is better suited to smart phone times that depend on every kind of juiced-up gossip for entertainment. Truth’s core, such as it is, now changes by the minute and by the messenger. Senders mimic tourists in foreign countries once mocked for shouting louder if locals failed to understand English. In this paradigm, indignation is a life force. Shouting excites and stirs. Political impasse, lathered with insult, is P.T. Barnum-style show time. The burlesque of being at loggerheads one-ups the state of the union. In fact it may be the state of the union.

Italy, historically older, is forever a step ahead when it comes to drama, and more rhetorically accomplished. Its ongoing woes are an unsurpassable entertainment cocktail, with a convicted, charismatic former prime minister nearing 80 recklessly and dishing out conspiracy theories. Self-righteous, a serial womanizer, but above all convinced he’s been wronged, he responds like Don Quixote with a temper. You can’t lose when you know you’re right, and when you’re right your enemies are wrong, deluded, misinformed, or Communist lackeys. Twitter that. And they are, for as long as it lasts.

As for the actors in the two-party American drama, the enemy is also the “irresponsible” other side, the biased one, the lying one. Excited flames are fanned. Belonging is volume. Worthiness depends on the side you chose. Responsibility is subject to passionate revision. Truth is the opposite of the lie told by others. Abbreviated sentences that contain their share of pathos.

All of which moots merit badges, if not merit itself.