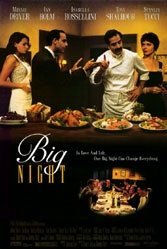 Here’s a chance to see two actors who clearly enjoy each other’s company carry out a labor of love. The love in this case is Stanley Tucci’s, who co-wrote and co-directed (with actor Campbell Scott), and Tony Shaloub’s, who’s clearly along for more than just the ride.

Shaloub is Primo, younger brother of Tucci, who is (what else?) Primo. The scene is set on the New Jersey shore in the 1950s, where the two Italian immigrant brothers run a restaurant called the Paradise. Chef Primo is a purist who can’t bear the idea of Italo-American spaghetti and meatballs. Host Secondo seconds that emotion, but plays the pragmatist: How can they succeed without playing to popular eating tastes? Anyway, the customer is always right. No matter, since the Paradise is struggling while the mediocre Italo-American “grotto” down the street, Pascal’s, is booming (“Do you know what happens in that restaurant every night? RAPE! RAPE!… The rape of cuisine,” says Primo.)

Pascal (Ian Holm, wildly but intriguingly cast) apparently takes pity on Secondo, offering to send him a prime time client, bandleader Louis Prima, to help keep his food pals from foreclosure. If you smell a ruse you’re right. But Primo and Secondo still forge ahead with plans for their big Prima-pleasing night. Secondo loves women, and divides his time between his girlfriend Phyllis (Minnie Driver) and mistress Gabriella (Isabella Rossellini), who is really Pascal’s girl. This while one-track Primo is focused on food.

Neither Primo nor Secondo’s Italian accents are particularly convincing, and Primo’s Italian utterances, for those who know the language, ring hollow. But that’s not the point. The film’s affection for character and food, for drawing the line between the crass and the genuine, transcends incidental shortcomings. What seems to be about the pros and cons of spaghetti and meatballs is really about how people interpret the nuances of both food and civility.

In placating a disgruntled American client, Secondo gets a pasta line for the ages: “Sometimes the spaghetti likes to be alone.”