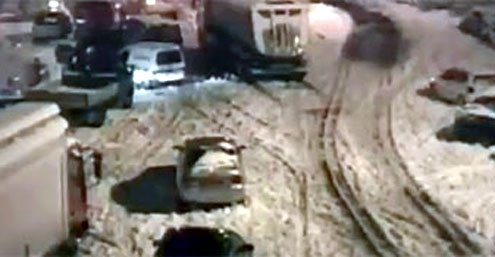 Snowtires and chains, anyone?
I

taly comes in many shapes and sizes. When outside attention isn’t focused on the lurid carnival of politics it falls instead on quaint small towns or chefs that concoct food from the simple.

But the Italy of infinite Tuscan sun and its chipper folklore has an antihero, winter. Most pay no attention to what it produces. They should.

“Chiave di lettura” is a uniquely Italian phrase that roughly means a theme, a way of understanding something, a subtext. Chiave means key and lettura is reading.

Italy’s response to winter weather is its subtext, a “reading” that helps explain the whole.

Like most of Europe, north and central Italy is enduring an arctic snap. Storms have slowed rail travel and the challenged the traffic flow on most major north-south highways, particularly near Florence. On December 16 and 17, thousands of cars and trucks backed up dozens of kilometers with some drivers barely advancing a car length in 12 hours. Many were trapped on access and exit ramps.

In a nation of drivers, the paralysis made big news. The mayor of Florence was pilloried. Local authorities were accused of ignoring stranded drivers, many out of gas. Truck drivers morphed into media darlings for distributing blankets to the trapped. A chaotic, maddening and dangerous scene produced typically damning rhetoric.

Until someone unexpectedly introduced the rational. The someone was Franco Gabrielli, who heads Italian civil defense. Many drivers, he said, had knowingly put themselves and others in harm’s way by driving foolishly into conditions they couldn’t possible manage.

If you want clues to Italy, put aside the drivers’ plight for a minute and hear out Gabrielli.

Italians knew the snow, sleet and ice forecast. It had been predicted, with warnings issued repeatedly on radio and television. Visibility was low. Driving was discouraged. Few listened.

Drivers determined to tackle major arteries were specifically told not to do so unless they had chains or snow tires. This recommendation also went unheeded. Most of the trapped vehicles drove into below-freezing conditions on normal radials. Their spins exacerbated the backlogs a hundred fold.

“There was,” commented Gabrielli, “a systematic lack of interest [in the conditions] on the part of Italians, who just got in their cars without thinking.”

It wants anti-seismic housing and efficient garbage collection and blames their absence on state incompetence or the pervasive underworld, or a conspiracy of both. Few mention tax evasion, though in most European states depend on tax income for public works projects and emergency prevention.

Italy’s social contract isn’t so much corrupt as incidental, casual even. Civics usually materializes only after something goes wrong, by which time “me-first” shrewdness has predictably transformed danger into full-blown woe.

Among natural barriers, snow and ice have always demonstrated the most contempt for human shrewdness. They’ve conspired to stop armies and invasions. Ask the Wermacht. Or Napoleon. Quiz Hannibal, who lost half his army and most of his aggrieved elephants in the Alps.

What makes Italy livable and loveable is its immense beauty and a daily human charity often capable of snake-charming the commonplace growl. What makes it ungovernable by left or right is a citizenry that always knows better than the latest best advice. Or more to the point, actively ignore that advice in favor of more immediate wants and needs. People trust their instincts first, complain later. In Anglo-Saxon countries, the quarrel between common sense and desire usually yields deference to one, or a compromise.

While bypassing the rational can produce a vividness of style, art, food, and even enrich seduction itself, snowstorms are big unimpressed lugs. They stand around waiting to make hay from collective stupidity.