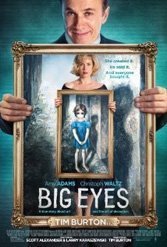 In 1959, Nashville-born California housewife and painter Margaret Ulbrich (Amy Adams) ditches her husband and skips off with her young daughter. She lands in San Francisco where she tries making ends meet by selling kitschy sketches of big-eyed waifs. Enter real estate broker, hack painter and hustler Walter Keane (“I’m just a Sunday painter, really.”) Keane (Christoph Waltz) sees something in her (just what isn’t clear), and the two begin a hasty whirlwind romance, marry, after which Walter — his own art dead-ended — starts selling credulous Margaret’s mesmerizing paintings as his own. Conservative Margaret — “I’m a divorcee with a child. Walter is a godsend…” — is shocked but compliant. Smarmy Walter thrives. And threatens: “If you say anything, this empire collapses.” Though wealthy on the fraud’s coattails, Margaret slowly turns despondent, disdainful and finally angry (“Margaret was trapped in a lie she helped create,” says the occasional and cloying narrator).

Sadly, there’s not a subtle or mysterious bone in director Tim Burton’s well-intentioned but clunky story of a deferential woman learning to stand up for herself — and her gifts — in a period in which males and husbands ruled the roost. Burton sticks to the chronology of Margaret’s and Keane’s relationship without working particular hard to make either credible. Instead, they’re both caricatures of insecurity egged on by period-piece trimmings: she’s a smart but shy woman reined in by social conventions; he’s an opportunistic man bent on self-aggrandizement. Almost inevitably, two reach a breaking point and end up in court.

As a comic book, it all makes sense — the truth shall set you free. As a story, the characters aren’t vivid enough for empathy. “Everything about you is calculating,” Margaret tells Walter. True. So is the film. Neither pouting Adams nor grinning Waltz gets much beyond second gear. Based on the life of artist Margaret Keane, who won a $4 million settlement in 1970.