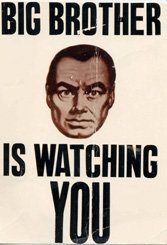 British people are more spied upon by their political leaders than any other population in the free world.
A

number of high profile arrests involving figures who have had their mobile phones tapped has led to a spate of jitteriness in some quarters of Italy. I know several officials in the comune of Spoleto who now categorically refuse to discuss anything remotely delicate on the phone, in the event someone might be listening in and the content of the phone call be… “misconstrued.” For the same reason, other people I know with less than squeaky clean consciences when it comes to business deals and tax returns have taken to wiping all traces from their computers and carrying sensitive information on a USB flash drive around their neck.

But Italians paranoid about the new Big Brother climate can take heart. It’s not as bad as in the UK. British people are more spied upon by their political leaders than any other population in the free world. A recent report reveals that the average Briton will be caught on CCTV camera up to 300 times a day. Most of them are unaware of being filmed, just as they are blissfully ignorant of the fact that boffins with nothing better to do are tracking their movements using automatic number plate recognition and recording every Internet site they visit. And while it used to be said that an Englishman’s home is his castle, this last bastion of refuge has also been breached.

There are now 266 laws that give authority not just to the police, but to a wide range of government functionaries, to enter private homes, using force if necessary. These massive powers have been accorded to tackle life-and-death issues such as the height of garden hedges and the presence of un-British bees buzzing around the flowers. Strange but true, failure to allow an official into a garden who is mandated to inspect hedge heights can lead to a £1,000 fine. Refusing to let the bee police into your property to detect the presence of any ‘foreign’ bees is also a punishable offence.

Then there are the fat police. Concerns about the growing problem of child obesity in the UK has prompted the government to come up with a brilliant solution. No, not building more sports facilities and improving health education. The answer, they have decided, lies in giving social workers powers to snoop around families and put obese children on a child protection register alongside youngsters deemed to be at risk of sexual or physical abuse. Since parents are to blame, goes the theory, it is only right and proper that they should be punished and in extreme cases, have their children removed from their care altogether.

Thankfully, Italy still has a long way to go before it reaches such levels of lunacy, but it cannot be denied that it does have plenty of quirky laws. Like the one that says anyone can knock on your door and demand to use the lavatory if they are caught short. Hopefully not too many people know about this one. Then there is the Stasi-like law brought in during the days of Red Brigades terrorism which states that you should report the presence of any visitor staying on your property within 48 hours. That one is really dumb, as presumably, real terrorists aren’t going to take much notice of it. Nor does anyone else for that matter, but failure to comply can land you with a whopping fine.

But one of the most sinister forces in Italy is without any doubt the wet hair police. These are not officially members of Italy’s law and order brigade. But they are to be found everywhere — at schools, sports centers, in the street and even in the home. Their mission is to reach out and touch your hair and see if it has been properly dried. Even one damp strand can land you in trouble.

My sister-in-law is a member of this dreaded sect. There is no financial penalty for breaking this unwritten law, but wet hair snoopers can make your life hell. I used to take my children to the swimming pool in Rome, where the heat in the changing rooms made it feel like one of the circles in Dante’s inferno. In winter and summer, rain or shine, there was a fixed hair police official posted at the door checking anyone who left. I once sneaked out the back way with my two daughters, fed up with feeding 10 cent pieces into the machine to dry their damp locks. It was nearly 30 degrees outside. I should have known better. I was apprehended by her colleague waiting at the top of the stairs. I never disobeyed again. Some rules just aren’t worth the fight.