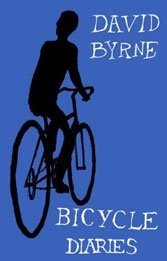 David Byrne may be best known as lead singer of art rock band the Talking Heads, but this probingly ethnographic account of decades spent biking the globe proves he’s as much shrewd cultural critic as musician. Taking to task modernist architect Le Corbusier and language philosopher Ludwig Wittgenstein, among others, can’t be easy. But Byrne does it — while pedaling across urban splendor and sprawl everywhere from westernizing Istanbul to deceptively cosmopolitan Buenos Aires.

Cycling, for Byrne, lends a more intimate perspective on buildings and life than cars or public transit can afford. That’s why his pedestrian point of view is sorely needed in today’s automobile-centric culture. Riding the congested streets of Manila reveal sidewalk karaoke machines, bootleg DVD vendors, and the darker truths of the Philippine’s complicated relationship with its colonial past. Spanish and United States imperialism left their footprint on Manila’s landscape, in what Byrne labels a wacky cultural collision between “three hundred years spent in a nunnery and one hundred years in Hollywood.”

In Sydney, Byrne makes the sly observation that English settlers are still so new to Australia that they haven’t had time to cram the city’s beaches, relatively unpopulated, with hawkers selling junk and miles of parked cars. City beaches anywhere else would be a mob scene.

Post-Hurricane Katrina New Orleans now means biking through “downtowns on the verge of becoming ruins,” but Byrne still calls it the last great U.S. city. In general, Byrne seems to find American cities problematic. “We travel great distances to gawk at the ruins of once-great civilizations, but where are the contemporary ruins?” he prods. America’s sloppy urban planning and racially-motivated “white flight” have left cities like Baltimore (where Scottish-born Byrne grew up) choking on their own dust.

Although Byrne is more concerned with what he ponders while biking than the act of biking itself, he does offer a few street savvy lessons for cyclists looking to tour the world. Berlin is the most bike friendly city (bike lanes have their own traffic lights; drivers don’t hog or overbear), and it’s possible to reach your destination while avoiding San Francisco’s treacherous terrain if you spend enough time studying the map. The best way to get to know a city, of course, is to be more like Byrne. Get on the bike and ride.