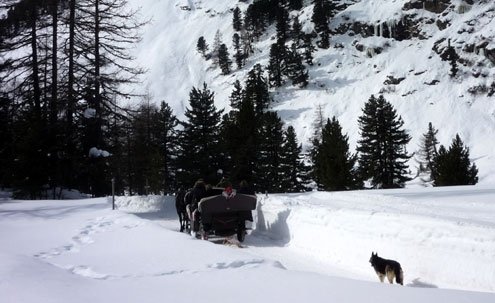 An afternoon sleigh ride. Photos by Andrea Smith.
A

s someone who grew up in northern climes, winter makes me hanker for snow — at least for a few hours of it. With the Alps so close to Milan, I can satisfy my nostalgia for pristine wonderland even for a day. If, like me, you want to hike, snowshoe or cross-country ski far from the madding crowd of alpine skiers and snowboarders, Val Roseg in Switzerland is a good choice.

Roseg valley is a lateral valley of Val Bernina. It runs roughly parallel to Engadina valley in the southeastern canton of Graubuenden near the Italian border. Although German is also spoken here, the language in this region is Ladino, a legacy of Romansch. In Ladino, “en” means stream. The River En, or Inn, as it is known in the lower Engadina, flows eastward from here and through Innsbruck in Austria on its journey to the Danube and Black Sea. Near its source in Engadina, the river is surrounded by crisp, dry air, pine and larch forests, lakes and the ice-clad peaks of the glacier-ribboned Bernina range.

Engadina has inspired artists such as Alberto and Giovanni Giacometti and Giovanni Segantini, and attracted writers such as Rilke and Nietzche. It is famous for its winter resorts; the best known is luxurious St. Moritz. Today we are going to nearby Pontresina (1,809-meters) in Val Bernina, the largest town and gateway to Val Roseg.

To get to Pontresina from Milan, my husband and I take the SS36 to Chiavenna. At the first roundabout, we follow the signs for San Moritz. We are now in Val Bregaglia. At Castasegna, we pass Swiss customs. We drive by the towns of Stampa and Maloja and through the Maloja Pass. We are now in the Engadina valley. At Sils and Silvaplana, we see Nordic skiers gliding on a white blanket of February-frozen lakes. After St. Moritz, we turn left into Val Bernina. At Pontresina, we park at the train station. You need Swiss franc coins to pay for parking. There is a change machine in the station ticket office.

From the station, we walk uphill towards the town center to the sleigh stop. We turn right in Via da God and follow this street, crossing over the rail line. After the houses, there’s a sign marking the beginning of the trails.

The paths for walkers have pink posts. They intertwine with the wider roads for sleighs. Never walk on the cross-country ski trails where the tracks are cleanly sliced. That’s a no-no and we’re in Switzerland. The snow is well-packed so gaiters and snowshoes aren’t necessary, unless you walk off-trail.

This is a very easy, leisurely, seven-kilometer walk with a 190-meter-climb to the restaurant at the Hotel Roseg Gletscher located at 1,999-meters (see below). Of course, you can also ski or ride a horse-drawn sleigh there. No motorized vehicles are allowed. Once on the trail, you can’t get lost. Heaven!

As we walk, silence follows. We hear snow fall from the branches of arolla and stone pine trees. Larch and firs also dot the valley floor. Looking up, we see frozen cascades gleaming in the sun on both rocky mountainsides. Bird calls. The air is so fresh we can smell the snow. The quiet is broken by the swish of skiers and tinkling of bells as horses pass on their way to the hotel. This is storybook Switzerland.

About an hour into the valley, we come across a bird-feeding station. I leave a donation, take a package of birdseed and spread some on my hand. Immediately coal and larger, great tits alight and eat from my hand. Their little claws scratch my palm as they peck. A crested tit feeds under a sign that indicates the bird species. Blackbirds caw overhead. Two brown and white-spotted nutcrackers perch atop an arolla pine.

We hike on. Before reaching the hotel, there is a trail off to the left that leads to a mountain refuge (closed in winter), the Roseg morain and Tschierva and Roseg glaciers at the end of the valley. It offers a good view of the high peaks, Piz Bernina (4,049-meters), the most easterly mountain above 4,000 meters, Piz Roseg and the Scerscen range. In winter, the path is occasionally closed if avalanche threatens. In summer, it’s good biking, Nordic walking and hiking and a wild-flower photographer’s paradise. Farther up, there are glacial lakes with little floating icebergs in warmer seasons.

We take the trail on the right to the pink Hotel Roseg Gletscher (Tel. +41.081.842. 6445). It sits on a wide, alluvial plain where the glacier once arrived. The self-service restaurant is separate from the hotel and dining room. We take a table outside and then opt to go inside to warm up. It’s surprisingly busy. I look around at plates of boiled sausage and industrial fries, plain spaghetti or with a too-bright, red sauce. People seem to enjoy the soup so I go for that and a slice of strudel. At least the soup is hot. The strudel is cold. We’re so close to Italy and yet the food and service are miles away.

In the afternoon, we decide to return to the birds. Then the temperature drops and the wind comes up so we quicken our steps back, but not without stopping to photograph five ibexes. Later, we spot three antelopes defying gravity on the upper slopes.

We arrive back in Pontresina just in time to see the famous, red Bernina Express train from Tirano chug into the station before its last stop in St. Moritz. Considered one of the most beautiful train rides in the world, it’s not hard to see why.