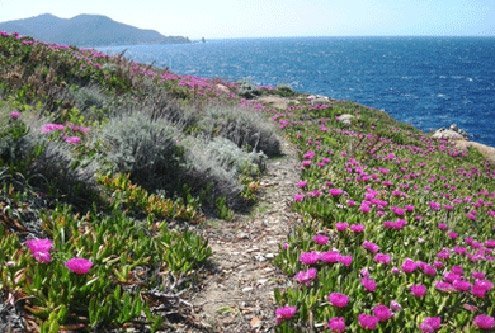 nce the outline of the “Costa Concordia” wreck was visible against the backdrop of Isola del Giglio, all the ferry passengers scuttled to that side of the deck. Two years ago, the last time I made this trip, ferry passengers pointed their cameras at the island. This time they focused on the wreck. It grounded vessel lay on its side, ugly, unnatural, and rusting, a surreal scar on the island — just as surreal now, upright. Also surreal was the watery city built around it, not a city per se but a factory with cranes and strange machinery and even an office building rising out of the water. The ship’s written name, “Costa Concordia,” and its bridge — then perpendicular into the water — seemed part of a giant blue eyebrow.

Then the ferry pulled into port.

Isola del Giglio is an island in the Tuscan Archipelago that before the January 2012 “Concordia” accident was known mostly to Italian tourists. It may yet get its tranquility back. In fact, after the orange bus pulled away from the port, up the steep, switchback roads to Castello and back down on the other side to Campese, both ship and wreck felt as far away as Rome, which is some 150 kilometers south. The world became composed of fragrant Mediterranean scrub, sea and sunsets and fresh seafood. Life is simpler on islands, among the reasons I go to Giglio whenever I can. Wi-fi is not in its genes.

Campese is a small and newish town that arcs over the bay and the island’s largest beach. Behind it, the hills are crossed by hiking paths and studded in wild rosemary. On the beach are the usual beach beds and umbrellas and several places where you can lay your towel for free (uncommon in Italy). My suspended shadow is cast on the sea floor as I swim. In the water, yellow fish feed on yellow sea plants. Every break of a wave pulls them from their dinner, only to shove them back. As for human dinners, we rely on local restaurants or the kitchen of our rented apartment. Either way it’s a feast of fresh shrimp, calamari, mussels or fish.

Arriving in Campese, we tossed our stuff into the apartment, went for a swim, and devoured a fishy dinner. Afterwards, we walked the 100 meters to the town’s only piazza, which is usually swarming with Campese regulars: families, teenagers, pre-adolescents and couples of all ages. Most crowded in front of an enormous red camper that had become a speaker platform. Popular, happy dance music blared. There was also a canon. When the two young men beside it let it rip, the canon spilled slug-like foam onto the crowd.

The situation was bizarre. The idyllic nighttime beach, the quietly crashing waves, the confused faces of the older people, the fierce smiles of the young, and, strangest of all, the foam. Everyone danced and squirmed, sculpting foam crowns and horns. Eventually it rose from the ground in a soapy stew, soaking clothes and shoes alike. The belching cannon stopped, only to resume 20 minutes later.

Thankfully, the “foam party” was the extent of the entertainment on Campese that week. The rest of the time we spent swimming, eating, walking, and lounging in the sun.

In Etruscan and Roman times, Giglio, which means lily in Italian, was a strategic coastal base, but its value diminished as sea power waned in importance. Throughout most of the 20th-century the island 16 kilometers from the mainland, was sparsely populated and had little in common with the fashionable coastal spots along the Tuscan coast. Electricity and running water were limited.

That changed in the 1980s as developers saw a chance to extend tourist borders and help popularize Tuscany. Now, its 27-kilometer coast is far friendlier to mainland visitors (unlike neighboring island Giannutri, which remains more primitive).

Until Campese was transformed into a resort, the island had just its port and a rocky medieval outpost predictably called Castello. Inside Castello’s San Pietro Apostolo church are papal relics and inlays portraying pirates, which the island had to deal with in abundance over the centuries.

As for shipwrecks, the “Costa Corcordia” is nothing new. In 1961, a British diver found the remains of a large Etruscan trading vessel. On the seafloor around it were perfume vials and empty vats of olive oil. Two decades later, salvage work dug up more ancient treasures from the Etruscan wreck, including pottery, amphora and military helmets. For a while, Giglio was known as the place that had the oldest shipwreck in the world.

Until it got a newer and far larger one, which, with luck, will be gone the next time I’m there.

From Rome, it’s a two-our ride from Rome Termini to Orbetello-Monte Argentario (half-a-dozen departures daily). Catch the local bus to Porto Santo Stefano, then the ferry to Isola del Giglio. There are several ferry companies to choose from and their hours are seasonal (always check the last departure). A bus runs from Porto, the port, to Campese every 15 minutes.

Mario di Meino is an excellent but busy fish restaurant. Reservations are highly recommended, especially on weekends. Via Provinciale, 26. Tel. +39.0564.804.087.

Campese has a good selection of hotels (including plenty near the beach). Rental companies are also plentiful. Baffigi and Landini Primo (+39.0564.804.135) are two of the best.