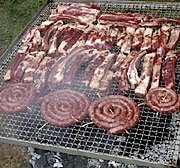 In Italy, the barbecue never seems to have evolved beyond meat, heat and eat.
E

xpats unite! Our adopted homeland is threatened! The time has come to close ranks, stand shoulder-to-shoulder, spatulas in hand, and defend Italians from (and I never thought I’d say this)… their own bad taste!

The issue at stake (at pit, really, but I’ll come back to that) is more unappetizing than another four years of George W. Bush (fortunately not possible), more pressing than Serie A soccer schedules, and more flavorless than frozen pizza. You know what I’m talking about. If you haven’t been to one, your turn is coming, that criminal mistreatment of good old-fashioned picnic foods that goes by the Inquisition-era appellation la grigliata.

Let’s face it. The Italian grigliata is a barbecue of the bland: a dry, flavorless fiesta of grilled flesh where the only condiments taken into consideration are olive oil and sea salt. Oh, you’ll encounter a rare sprig of rosemary. I’ve heard tales of the stray sage leaf. But that’s it. No sauce, no marinade, no seasoning. Hold the ketchup, mustard and relish. What the heck, hold the buns too. (At this point, a wise picnicker would seriously consider holding the whole barbecue and making for his local trattoria.)

I’ve never understood it, really. There’s plenty of top quality barbecue out there for everyone. It’s not like there’s a dearth of information on the subject. Google the word and you’ll get well over 10 million hits. Nor do Italians lack appreciation for the flavors. Following Thanksgiving and cheesecake, I’ve found that “bee-bee-cu” is at the top of Italians’ culinary curiosity list when it comes to table talk. In this country, I’m always being asked about sauces, spices and hamburger tricks, and no outdoor conversation is complete without being regaled with tales of barbecues past, of vacation visits to a friend of a friend’s backyard somewhere in southern New Jersey where burgers were flipped, pork was pulled and the food was enjoyed by all.

But in the Italian picnic tradition, the barbecue never seems to have evolved beyond meat, heat and eat, wasting a host of wonderful vacation days from pasquetta through ferragosto. And the few cheap aluminum mesh grilles (not grills) I’ve seen on sale around these parts would struggle to hold their own against even the humblest of hibachis.

Most Italians will stand by their bland backyard practices with the noblest of defenses: it’s all about the great meat taste, amico mio. There’s truth in that; after all the best Texas barbecue takes little more than salt and compliments for condiment. But unless you’re serving filet mignon behind the villa, your barbecue is going to need outside help.

Etymologists pretty much agree that barbecue’s modern name is derived from “barabicu,” a Caribbean word that translates as “sacred fire pit” (sacred, my Italian friends. Sacred!), and meant cooking meats slowly in a low oven dug out of the earth. Today there’s not much shovel oven left in the practice, but the basic idea — cooking meat slowly with lots of smoke and tasty juices — remains the same.

Migrating north, the practice of barabicu became a key element in American cuisine. There’s hardly a state in the nation that doesn’t have some kind of festival or competition to celebrate it, and at least half lay claim to being the undisputed champs. It has become “barbie” in Australia and New Zealand, and “braai” in South Africa. But no matter where it’s found, the key to enjoying the meat is always the addition of sauces and marinades that add flavor and moisture to its taste.

Of course, while barbecue sauces practically own their own aisle in North American supermarkets, you’d be hard-pressed to find a single commercial sauce in even the most well stocked supermercato. But that’s no excuse, since almost all sauces are variations on a theme that stars vinegar, ketchup, water, salt and pepper, all of which can be found in abundance on this side of the Atlantic. And the Internet provides an endless array of recipes to experiment with. The nice thing about barbecue sauces and marinades is that they’re hard to get wrong. There are so many spices and flavor combinations that almost anything will prove better than flame-dried beef and savorless sausage.

So, champion barbecue. Promote savory sauces. A country that serves the best in just about everything deserves more than charcoal-grilled blah. Have a heart: teach somebody to marinate. The tastebuds you’re saving might well be your own.