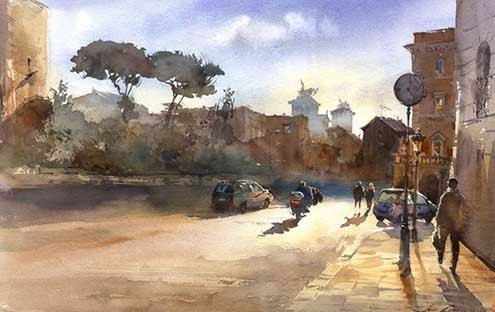 It's possible to do without Rome, but aspects of your stay you always carry with you.
I

n April, while in New York for a graduate school reunion, I saw something in an East Side cheese shop that made me smile: Parmesan cheese rinds for sale.

About a month before, I had been musing on my own Parmesan rinds, bundled in a piece of foil at my house in Florida. I was intending to use them to soften into soup, a custom I’d learned while living in Rome. Eventually the cheese rinds got so hard, and the weather so hot, that I threw them out, but they reminded me of a cliché that still applies to my life: You can take the girl out of Rome, but you can’t take the Rome out of the girl.

August marks 10 years since I left the city to come back to America. Roughly eight years before that, I had moved to Rome straight out of college, with a small scholarship in hand and heady visions of what I wanted my life in Italy to be like. Mostly, I wanted to be a journalist who wrote stories about immigration, a subject I’d learned about in college. Instead, I stumbled into a love affair that defined much of my Rome experience.

After the affair ended, my mother was diagnosed with terminal cancer, and I decided it was time to go home. I left Rome in fretta e furia — fast and furiously. I was harried and conflicted. I had fallen for the city. Hard. It had taken me from being a shy, Midwestern girl to a less shy young woman of pluck and passion. I explained my departure by saying I needed to attend graduate school in New York, only partly true. The real reason — that I didn’t want my mother to die alone — I kept mostly to myself. After her death, American friends insistently asked, “When are you going back to Italy?” To them, my Roman life sounded like a dream.

But the question always startled me into silence. I had no desire to return to Rome then — not because I didn’t love it but almost because I’d loved it too much.

Besides, there were other things that I wanted to do in the States: follow a career, develop my writer’s voice, and ensure my remaining parent was going to be okay.

This summer I’m in Iowa, helping my father unclutter the family home. I also finally reopened my boxes of Rome items: pictures, books, ticket stubs, even chocolate wrappers. My first reporter’s notebooks with curious, personal notes-to-self scribbled in the margins. Like this one: “Loss is as poignant as discovery.” It’s as if I was already scripting the story that I wouldn’t understand for another decade.

Appropriately, among my dozens of Italian books, I find a tome called Nostalgia: Storia di un sentimento, from a history class I had taken at La Sapienza. I remember being thrilled that whole books were dedicated to feelings. This was one of my many beautiful discoveries in Italy. Less lofty ones, like holding onto cheese rinds, often manifest in my daily habits. Here are some of those:

• My ear is tuned to Italian. Recently, I was interviewing someone whose first name was Matthew. I’m slightly hard of hearing, so I asked him to repeat his first name. Somehow, I’d heard “Ma-chew,” which I embarrassingly repeated aloud for clarity. As if to cover for my shame, I quickly nailed his Italian last name: Lipari, as in the island.

• I sometimes think in Italian, especially for matters of the heart. The week Donald Trump was elected I muttered che tragedia to myself. I use dimmi — “tell me” or “yes?” — so often my American companion now knows how to respond. As with, Dammi un bacio. And so on. I consider learning Italian fluently second only to a childhood spent playing the violin and piano as the great gifts in my life.

• When my temper flares, it does so Italian-style. It is relentless, rhetorical, and without any room for reason. It also usually works. I hold court.

• I have strange obsessions — like constantly opening windows and doors to air out closed spaces. One of my first questions to landlords is, “Are there windows you can open?” followed by, “Are there screens?” I also fixate on the liver, il fegato. If someone is drinking too much, I worry, not about drunkenness or even alcoholism, but about the state of their liver.

• I peel my ceci. My Italian ex taught me this once by showing me all the grimy peels. “Would you really want to digest all that?” he said. He’d had a running start in life for such insights. His nanny had apparently peeled his grapes — something I now do sometimes as well.

• My reverence for food. If it’s not good, I don’t eat it. I stick to an Italian breakfast of caffeine (espresso) and sugar (biscotti). I revive otherwise throwaway foods —cooked spaghetti, onions, parsley — for frittatas. I don’t go as far as my Italian ex, who once kissed rice kernels that had fallen to the ground.

Once, though, while making angel hair pasta with my American companion, I intervened before he took cooking scissors to a heap of boiled pasta. “Stop!” I said, quickly taking over. He looked at me perplexed and said, “I was just trying to be efficient.” “Efficient” hit my ear like a swear word.

Later on, he said to me, sweetly, “Where did I find you?” I just smiled, later thinking of the right response: Between two countries.