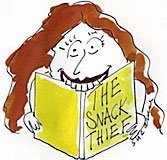 Food makes us want to turn the pages and savor the sentences. Drawing by Suzanne Dunaway.
S

ome people indulge in chocolate truffles. I instead devour books, particularly mysteries. There’s nothing so luscious and luxurious as a book by my bed. Nothing better to look forward to than settling into sleep with the latest Donna Leon, Martin Cruz Smith, or Andrea Camilleri (and on heavier nights, Icelandic wizard Arnaldur Indriodason, whose name has an “o” accent my keyboard won’t acknowledge).

These authors strategically include food to flavor and enrich plot, much as a well-reduced glace of meat, fowl or fish livens up the boeuf bourguignon or bouillabaisse.

What would Camilleri’s marvelous, moody Montalbano be without the “customary wolf-like hunger” that washes over him just as he’s hot on the trail of a Mafia don.

Just the idea that he swerved off the road and into a trattoria (where he orders spaghetti in squid ink, a dozen baby octopus dumplings, and settles in to consider his latest case) makes me an addict. I’ve read all his books, beginning, appropriately enough, with “The Snack Thief.”

And how about our favorite Venetian, Guido Brunetti? The Brunetti who refuses to start the day without a couple of brioches dunked in caffé ristretto and would gladly pass up promotions just to be home at lunchtime when plucky Paola does her magic in the kitchen.

Here’s an excerpt: “Brunetti poured himself another half glass of wine. ‘Caprese?’ he asked, nodding at the ring of tomatoes on the plate in front of Paola. ‘Oh, supercop,’ Paola said, reaching for another tomato. He sees a ring of tomatoes with spaces left between each slice, pieces just big enough to allow a slice of mozzarella to be slipped in between them, and then he sees the fresh basil standing in a glass to the left of his fair wife, right beside the fresh mozzarella that lies on a plate. And he puts it all together and guesses, with lightning-like induction, that it’s insalata caprese for dinner.”

Yep, this is our beloved Brunetti, the man who revs up for each lunch and dinner and sips prosecco at the end of the day. His antics inspire me in my own kitchen.

Food is mood. I’m deep into Cruz Smith’s “Stalin’s Ghost,” wondering at how its hero, Arkady, gets through the day on only cigarettes, sausage, fatback and bread — and a few shots of vodka, since all good Russians need their minimum daily requirement. The pages of Cruz Smith’s novels are damp with vodka, which is almost as ubiquitous as the lamb kebabs, pilaf, and cigarette smoke in my now-favorite Turkish mystery series by Barbara Nadel.

The same thing happened when I got started on James Clavell. “Tai Pan” pushed me toward serious Chinese cooking — fish in sour sauce, shrimp pancakes, paper-thin wrappers for red bean curd and cloud-ear mushrooms. I chopped and cleavered and stir-fried every night for three months, reading slowly to make the flavor last. Reading “Shogun” made a large but delicious dent in my bank account — I ate sushi daily for as long as the book held out, filling the fridge with Spanish mackerel, seaweed, fresh wasabi, and the best sake I could find. Those were the days.

I don’t trust authors who don’t mention food in their fiction. Food makes us want to turn the pages and savor the sentences. Even Faulkner got around to grits and greens. Food peppers plot and characters, whether it’s a cop dipping donuts in a squad car or a table spread for Napoleon’s triumphant return from the wars.