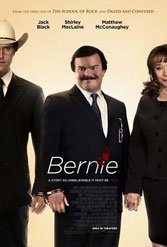 No convenience store label aptly suits director Richard Linklater’s quirky true crime tale set in small-town Texas of the mid-1990s, where a much-beloved local mortician named Bernie Tiede murdered a rich elderly window after she’d appointed herself his keeper and slave-driver, or so goes Linklater’s version. Driven by Jack Black’s controlled and sympathetic portrayal of Bernie, this is black comedy with an American Gothic twist (at times undermined by slangy Texas aphorisms whose nonstop volume paradoxically mocks the idiosyncrasies of the premise.)

On the plus side is Black’s immaculate portrayal of Tiede, a fussy, sweet-natured mortician who dainty kindness wins over Carthage, Texas locals. His employer calls him “an artist the embalming room” while townies can’t get enough of his Liberace-cum-choir boy crooning. Enter poker-faced Marjorie “Marge” Nugent (bless Shirley MacLaine), the octogenarian widow of a local banker widely considered a “mean, old hateful bitch.” Irrepressible Bernie sidles up to her, plays companion, travels with her, spends her money, gradually becoming a dependent gadfly — until she tires of him and reverts to her beloved hatefulness.

Though the “gayish” Bernie can’t hit an armadillo from close range, he does manage to shoot nagging Marge, stick her body in a freezer, and turn philanthropist with her cash (he also buys a plane). Linklater casts actors Black, MacLaine, Matthew McConaughey in real-life roles — as Bernie, Marge, and local DA Danny Buck Davidson — while the Bernie-loving townspeople speak their mind in documentary-style snippets.

“You cannot have grief tragically becoming comedy,” Tiede tells mortuary science graduates at the start. Yet that’s just what happens here. Black, known mostly for vulgar camp, is asked to wed sincerity with haplessness, which he does brilliantly. Skip Hollandsworth co-wrote the script with Linkalter based on a 1998 article Hollandsworth published in Texas Monthly magazine. Bernie-mania led to the moving of his trial to nearby San Augustine. It didn’t help.