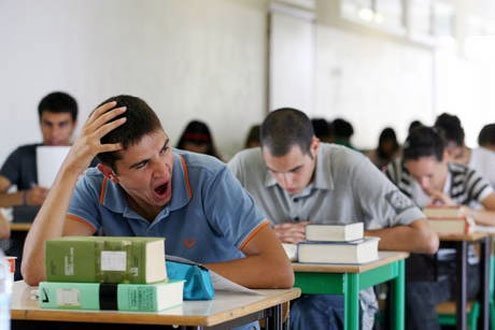 Who has the crib sheet?
I

n late February, Prime Minister Silvio Berlusconi attacked Italy’s public school system. “Liberty,” he said in a speech, “means the possibility of educating ones children freely and freely means not being forced to send them to state schools where there are teachers who want to inculcate principles that are contrary to those of their parents.” His approach immediately produced a storm.

Berlusconi’s words had two obvious motives: To rally his supporters against the bogeymen among the country’s polluting left-wing conspiracy of judges, intellectuals and assorted Communist pinkos. To placate the Roman Catholic Church, whose schools are the implied alternative to state ones.

Berlusconi’s alliance with the Vatican, still a political necessity in Italy, is uneasy. Although his majority party tends to support church positions on abortion and euthanasia — the public school speech also attacked gay marriage and adoption — his lifestyle tangles clerics up in double-speak.

That said, Italy’s academic environment does instill some strange principles. Last week my daughter came home in tears because a liceo classmate bragged about her higher grade-obtained by cheating.

A March 2011 report in the national daily La Repubblica suggested that only 24 percent of professors find copying from others “very condemnable” while 77 percent thought sharing answers “pardonable.” One out of four students who cheat are happy they did.

For Berlusconi, what’s not to like about the principles of not enforcing rules or not playing fair? If he thought about it, he’d find Italian schools offers some other equally likable principles. Here are some:

— A crucifix in every classroom.

— Lack of day care and half-day school hours, which contribute to Italy’s gender gap by keeping mothers at home and limiting female role models. If mom can juggle a full-time job with half-day school hours, as most Italian ones do, her children may spend their afternoons with the video babysitter. Guess which principles Italian TV inculcates?

— Punitive grading systems that not only reward cheaters but punish achievement. Not to mention a university system that’s based on patronage and run by academic baronial class. As a result, far too many students and ambitious graduates take their energies abroad, where the rewards system is coherent.

— An elitist secondary school system that favors students from cultured and wealthy families. The students in my children’s central Milan, public licei classici are less diverse than those in their selective American boarding schools. Their Italian classmates do not need to achieve, or worry about an anachronistic system based on Latin and Greek or even about studying science and math taught at levels below other nations. Connections, not grades, will get them their jobs. This creates resignation, discouragement and lack of motivation. Why try? Why challenge authority or the status quo? Cosa vuoi fare?

Critical thinking is missing even from elite schools. So is class discussion. There is only one opinion or interpretation; the teacher’s. The emphasis is on ingesting information, not analyzing or questioning it. What kind of citizens emerge as a result?

— A system where there is virtually no written work? Again, students are left with poor organizational and analytical skills. Limited writing assignments encourage a style that is pompous, florid and obscure. Italian newspapers, which even educated readers have trouble understanding, are a consequence of this. They make following current events difficult and give ammunition to anti-intellectualism. Television becomes a welcome relief.

Italian education puts a premium on the humanities, while science and math are weak. This in turn creates a credulous citizenry unfamiliar with fact-based analysis and easily swayed by dubious statistics. As jurist Pietro Ichino has noted, Italian policy-making is not based on scientific method, where approaches are first tested and verified on a pilot group before being extended nationally. What then are they based on?

His economist brother, Andrea Ichino, has noted that punishment in Italian schools is often collective. An entire class can be punished when one or a few students act up. This discourages personal responsibility and rewards omertà. (I’m a paid up Ichino-family Fan Club member.)

Add these up, and you have a system that turns out good little citizens of Berluscolandia.

Such citizens mistake talk show snarling for democratic dialogue. They are untrained in independent thinking. They do not challenge the status quo or take personal responsibility. They keep women at home or pay them less in the workplace. They prefer TV to books or newspapers. They make policy based on hunches or ideology.

These are the principles Berlusconi would love to inculcate. And this is one parent who loathes them.