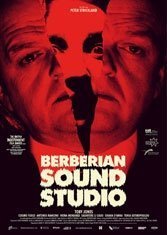 In Peter Strickland’s low-budget mind-warper, a shy British sound engineer named Gilderoy (Toby Jones) travels to 1970s Italy thinking he’s been hired to work on in a film about horses. But like so much else in this story, the horse movie is a ruse. Gilderoy instead finds himself tasked with tweaking the volume for “The Equestrian Vortex,” a Gothic horror screamer heavy on witches, demons and medieval torture. In over his head and spin-dizzy, he’s too passive to walk away.

Overseeing him is an odd Italian producer (who behaves more like Torquemada), a lascivious director, and a host of female dubbers who, though hired to howl and speak in tongues, acquire the collective mood of ghouls. The harder diligent, impressionable Gilderoy works to make screams and smashed melons reek equally of dread, the further he slips into a sound-induced coma.

Strickland is clearly less interested in developing an a-b-c storyline than suggesting how frequency and modulation factor into the mental mechanics of fear. He shamelessly combines Ed Wood tactics with Gregorian Chant timbres to create a surreal vision of an insecure man at risk of being psychologically disemboweled. It’s 300 percent style and two percent substance, with Gilderoy spinning around in increasingly angry circles until he’s at one with a studio the enigmatic script suggests he may never have entered in the first place (an accountant says there’s no record of his arriving flight). Though Gilderoy’s character is never fleshed out, the sounds of his mind are, and unsettlingly.