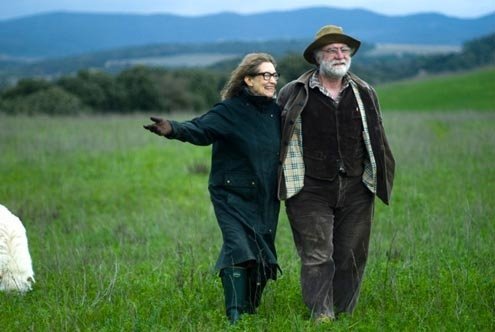 While the buzz says this year’s 2007 Brunello di Montalcino is among the best vintages ever, I put winemaker and terroir (which differs substantially around Montalcino) ahead of vintage years. My four favorite producers are notably different in their backgrounds and estates, but each one makes outstanding Brunello. The stipulated prices are based on recent averages.

Baricci (€40) Nello Baricci and son Federico are authentic artisanal producers, honest, humble and close to the land. When I visited their cantina, the entire annual production (12,000 bottles of Brunello and 18,000 of Rosso) was still in botti grandi — large barrels — in one small room. After showing me the cantina, the elder of the two Bariccis invited me to the upstairs “tasting room,” which doubles as the family’s dining area.

In 1955, Nello’s father, also named Federico, scraped together enough money necessary to buy the five hectares his extended family had worked for generations as tenant farmers. Though Federico’s uncles, aunts and and cousins left the land after World War II, he persisted. He planted vineyards and olive trees and by 1967 had his own output of excellent Brunello. Federico Baricci, elder, was among the original 26 producers of the prestigious Consorzio di Brunello.

Baricci is a tiny family operation, with Nello and his son focused on making wine, not marketing. As a result, these splendid wines are still available at reasonable prices.

The winery maintains its aristocratic ease (a long “allée” of cypress trees, family villas, and old vines of the vast Greppo estate that include 20 hectares of vineyards). Franco Biondi-Santi, now 90, and his children, Jacopo and Alessandra, continue to make traditional Brunello without barriques. Biondi-Santi Brunello is aged in botti grandi, some of which date back to the 1860s. It is a structured wine that can be drunk relatively young but is best 10, 20 or even 40 years after bottling.

Il Cupano (€70) Rome-born Ornella Tondini and husband Lionel Cousin, a former Parisian cinematographer, are a remarkable twosome. Their 3.5 hectares of vineyards are on rocky soil, have a southeast exposure and a sloping hillside, ingredients that conspire in favor of high-quality Brunello.

Over a sumptuous lunch in the kitchen of their big Tuscan farm table, Ornella explained that one of their first vintages was 2002, a year written off by critics as disastrous. But Lionel and Ornella stuck by their 2002 for its unusual terroir. An exclusive group of Burgundy winemakers with whom they’re associated confirmed their hunch, which critics also came around to.

Lionel is alone among Brunello makers in following the Burgundian tradition of leaving his wine on “the lees” (grape skins and yeasts left over after fermentation) as it ages in French barriques, or small barrels. It has the elegance and structure of Burgundy but the vivacity, color and authenticity of sangiovese grosso.

Case Basse di Gianfranco Soldera (€175) Gianfranco Soldera, raised in Milan, makes a transcendental Brunello. He sees wine as an expression of culture and harmony. “Wine is fundamentally connected to the development of civilization from the Fertile Crescent to the Phoenicians, the Greeks and the Romans,” he told me as we walked around his vineyard on a Sunday morning.

In Milan, Soldero regularly attended La Scala and classical music concerts. When he and his wife bought Le Case Basse in the 1970s, he planted his two-hectare vineyard. Next to it, she laid out an extraordinary botanical garden with 1,500 varieties of plants and herbs.

The richness and variety of the garden gives his wine flavor, depth and elegance. He spoke of the harmony of the plants in the garden, the ancient olive tree in the center of his vineyard, and of the vines themselves, as though they were part of a well-tuned orchestra and he the orchestra’s maestro. And he certainly is.