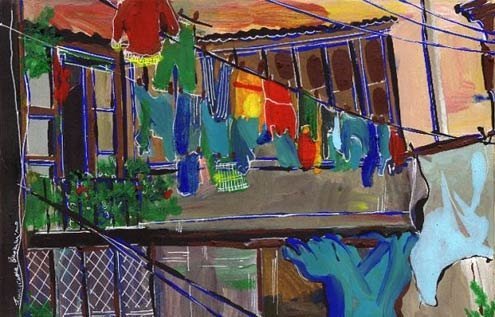 ne of my favorite things about working with young Americans in Italy is giving them the “Introduction to living in an apartment in Rome” speech. This technically could also be called the “How not to piss off your Roman neighbors,” but I pick the former to stay on the PC side of politeness.

The speech always draws blank stares since I’m talking to adults (at least age-wise). I’m not always a crowd pleaser. My audiences think I’m preaching or treating them like infants. But I’d rather be blunt.

There’s a big difference between living in a house in the United States and occupying an apartment in Rome. The Rome apartment living experience has a culture behind it that many Americans don’t expect and aren’t prepared for. Which is why, I tell them, we’re having this little chat — to limit their expectations and welcome them to the real world.

Here’s some of what I say:

— Your neighbors hear everything that goes on inside your apartment and everything that happens in its immediate proximity. Everything. This means that when you come home late at night clanking heels on the stairs while yelling to Sally to get your purse, you may not make friends.

— There is a noise ordinance law in Italy. After 11 p.m., you shouldn’t be talking loudly on your phone or playing music on the balcony. Take it inside. Failure to heed to this warning could land you a bucket of water. I’ve known tenants that have had the pleasure of being doused by a late night shower.

— The building courtyard is not for sunbathing or BBQs. It’s there for appearances only.

— The elevator. Ahhh, the elevator. If it were up to the building condominio, or condo board, they’d vote to bar you from using it. To avoid trouble, always ensure you close the elevator doors after every use. If not, Signora Rossi won’t be able to summon the elevator to take her to her fourth-floor apartment.

— Side note on the elevator: In many buildings, the first button you press is the first stop the elevator makes. Which means if Signora Rossi has to go to the fourth floor, and you’ve just pressed the fifth floor button, it’ll be a long ride up for the two of you. Believe me, you’ll have her yelling, “‘sti americani!”

— You might want to invest in house slippers. Wall-to-wall carpeting just doesn’t exist in Italy and well, have you noticed how dirty Rome is? Dirt tracks in fast. And that’s why your feet are so black. Yeah, it’s probably not a good idea to walk around barefoot either.

— Always bring your keys with you. And never forget which one is your doorbell buzzer, or citofono. Pressing every buzzer because you’ve forgotten where you live at 3 a.m. will not win friends or earn admiration for your persistence. Trust me.

— Graffiti on the walls of your building does not mean that you live in the “ghetto” or the ‘hood. Graffiti is everywhere in Rome, except for maybe the centro and upscale Parioli, in northern Rome.

— While the stairwell is technically for the use of all, it’s not. Once again, it exists for looks again and/or to get you to your apartment if the elevator breaks down (for the zillionth time). That’s it. It’s definitely not to be used for extra standing room when your apartment party hits capacity and starts to overflow.

— See that rack hanging outside your window or balcony? That’s called a drying rack or a clothesline. Dryers are rare in Italy. It’s a sunny country and ironing is a tradition. (This usually gets a lot of moans and groans). Like it or not, this is how most people dry their clothes in Italy.

Any questions? Good. Benvenuti a Roma!