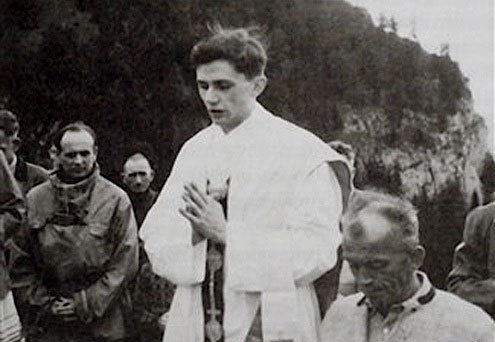 The spokesman does not know. The security chief is unaware.

But for Benedict this is a true story. Let them suppose otherwise.

He has borrowed (is that the appropriate word?) a car from two priests in the inner courtyard. They know who he is but are paralyzed by astonishment to which they yield irrationally.

He says, “Please, I am going driving. Give me the keys.”

Priests are baffled by maverick acts. He knows this. He knows also that simple connections falter. Security asserts a control it usually lacks. All that is official is often distracted and haphazard. This can be the will of God.

I am not famous, says Benedict to himself. I am going driving.

Who else did such a thing he wonders as he swings the small car into the wide avenue that flanks the busy courtyard. Have the guards noticed him? He doubts it. (A loud-mouthed nuncio who is lost momentarily distracts them.)

So who else? John was too big, Paul too smart and recondite. Neither felt well. The patriarch Luciani? Maybe; yes: This would have suited Luciani. Even a walk. But he didn’t survive much past Venice. The capital undid him.

How his predecessor would have behaved, that was tougher. But Benedict decided the Pole would not have driven. Not alone. Not carelessly. He liked fame. It engulfed him as he pretended not to notice. Spontaneity was an agent of vanity — the travel, the flirtation — so indulging the covert corrupted the metaphor. No, the Pole would not have done this, not in the same way.

I am Benedict. I am driving. Benedict likes the sound of this.

The spokesman does not know; the security man, all big glasses and sweet grin, will eventually hear the news from accented subalterns. He will yowl unhappily, as a captain might to a corporal in a bewildering war: “So the munitions have legs!”

Benedict enjoys the Roman summer. It can remind him at times of the 1950s and early 60s, before automobiles, airplanes, and the device-filling spillage of voices carelessly aroused whole cities. All this, to Benedict, came unnervingly at once, and he retreated. That some theologians defend such evident decline is, he thinks, shocking.

Mine, says Benedict, will be a papacy of ideas. The Pole was (how just to say it?) too geographical, too physical, too endearingly public. It’s hard to embrace so much motion. It causes commotion. My leadership will be like this car driven by me, not veering, precise, swift, specific.

Benedict is at the piazza where the trams sulk in rows like beasts before waking individually to plow to and from the river. Benedict is in second gear, the one he remembers best. The car smells of priests, from how vestments get when they hang too long in the same closet.

To his left, at the intersection, is an argument in a car. A tanned man with dark glasses gestures at a woman with a telephone. She taps her fingernails on the phone as he shouts insults or directions. Much is unclear. She seems uninterested in his speech and maintains the tapping. Click, click, click. Suddenly, the car leaps away.

He doesn’t know so he dissembles, “I am Benedict. I am driving. No one knows me. That’s a start.” He smiles.

He has reached the road by the river. He has never driven here, only been driven, usually in a convoy, to a specific destination. One driver, who bobs his head tribally, seems suddenly to recognize him. But the driver won’t believe himself. “Ma guarda un po questo qua,” he mutters.

Benedict realizes he is in robes. He is perhaps too elegant, too supremely white. He could in fact give himself away.

But this can be his strength as well. Who would think it, a pope in a car? He has (in some manner) evaded even himself, reined in his office. The Pole would have worked to elicit interest. “Look,”he would have announced. “Look that I am in a car, driving!”

He clasps both hands tight over the top of the knobbed wheel and considers how the world is crowded with clamor. Noise has its own celebrity. Groans and grunts are the leveling volume. And people seek what they know. He is distracted now. He must be careful in third gear. He must try to avoid fourth. He is in a city. He is expected to behave.

What if he bought a racer? A Mercedes, say. Or what if, on a whim, he purchased a mobile telephone. Blue. He might make house calls.

I could stay out, thinks Benedict.

I could drive — to Berlin, say.

I am not famous.

I could make good time getting there.

I am Benedict, driving. Who would ever know?