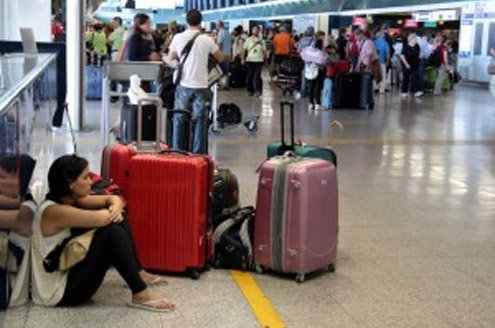 Waiting can be an Italian national sport, whether at airports or post offices.
I

n Italy, nonchalance can seem endemic. Canceling last-minute is unsurprising; arriving late, apropos. I’ve seen a construction worker smash through my wall with a hammer and seem surprised that I was annoyed. Even those charged with upholding their industry’s rules treat them casually: Tax accountants advise you not to file, attorneys accept payments off the books.

Life, it seems, often revolves around only a handful of fixed points: la bella figura, sit-down meals, and ferragosto (though even commitment to those three necessities are changing).

If that kind of casual approach can wreak havoc on society, it creates even more chaos for travelers. When one of my flights was delayed by five hours this summer, all passengers were offered (contrary to EU law) was a shrug and a cappuccino. On another trip, three days after a friend’s suitcase failed to appear on the conveyer belt, the airline courier arrived at her door — with luggage that wasn’t hers. The same morning I was supposed to leave a tiny island by ferry, I received a call saying that the booking hadn’t been confirmed (computer problem), I didn’t have a ticket, and there were no other ferries that day.

By the end of a travel-filled summer, my Anglo-Saxon mind was out of patience with Italy’s casual approach.

But I still had one more trip, to Pantelleria, a volcanic island off the coast of Sicily, with three friends.

The evening before leaving, my phone rang. “So…” said Sophie. “We just looked at our tickets again. And our flight for Pantelleria leaves 20 minutes after our first flight, the one from Rome, lands in Trapani.”

“Yeah. We messed up. We thought they were the same airline, but they’re two different ones. So we’ll have to disembark, check back in, go through security, and get to the gate… in 20 minutes.”

I groaned. The summer already had drained my bank account; I couldn’t afford being dinged by a lost flight, too. “We’ll just have to hope we make it,” I said, knowing we probably wouldn’t.

Still, we decided to try. From the moment we arrived at the airport the next morning, we schemed strategies. We were flying Ryanair, so we got there as early as possible to ensure we were first in line — so we could board first and get forward seats. After an hour of standing at the gate, we noticed the people behind us in line were moving… elsewhere. “Oh, no. They’ve changed our gate,” I said. By the time we got to the new boarding gate, we were near the back.

When the gate opened, we ran for the plane, bumping our wheeled carry-ons behind us. In other countries, that kind of strange behavior might have alerted security. Or, at the least, gotten us odd looks from the other passengers. In Rome, it meant that other passengers, assuming they’d missed something, fell into a jog behind us.

Not that it mattered. Inside the plane, yellow tape marked “Reserved” cordoned off the front section of seats. They were for passengers who had paid for premium seating, which we-not knowing our predicament until it was too late-hadn’t. But as the flight took off, we realized nobody else had purchased them, either.

We knew Ryanair’s regulations were strict. But maybe, just this once, those rules could be bent.

The stewards were male. Our friend who went to plead our case was a sweet-faced blonde who happened to be wearing shorts and heels — a strategy meant to keep her luggage as light as possible, but also suddenly helpful in a different way. She returned with a thumbs-up. We moved to the front.

As the plane started its descent, the stewards sat across from us. “So when exactly is your next flight?” one asked. I checked my watch. “Um, 30 minutes from now,” I said.

“You’re not going to make it!”

The plane landed on time. We had precisely 20 minutes. We poised like sprinters before a race, hands on belt clasps, purses over shoulders, eyes trained on the steward for the “go” he’d promised us. He gave us the nod. With adrenaline-spiked choreographic precision, we shot from our seats, twisted to grab luggage from overhead compartments and took off down the stairs. “Good luck!” he called after us.

We ran across the tarmac, two of us in heels. Clio met us at the gate, abandoning even the requisite cheek-kiss of Italian greetings to call “Follow me!” Between panted breaths, she shouted back to us that she’d spent all morning talking to everyone at the airport about our predicament. They’d agreed to help. And so, instead of having to go through the full check-in, we threw down IDs on the desk and scooped up our boarding passes, already printed.

We sprinted to the security line. Mercifully, it was brief.

And there it was: the gate. We had two minutes before takeoff. Against all odds — and, likely, regulations — they’d kept the gate open for us.

The plane took off on time. With us on it.

As I collapsed, sweating, into my seat, I smiled at the stewardess. I knew why we’d made our flight. And it wasn’t luck. It was the kindness of strangers… and the willingness, when called for, to bend the rules.