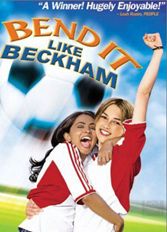 Call it cute, but by the time director director Gurinder Chadha finishes wallowing in self-conscious ethnic gags, soccer doesn’t stand a chance. Two West London teens, Anglo-Indian Jess (Parminder Nagra) and Brit Jules (Keira Knightley) prefer the pitch to the kitchen. Jess is the daughter of hidebound middle class Punjabis who find their daughter’s soccer swoon (and love for Becks) at odds with tradition (Indian cooking gets a relentless send-up). Nor is Jules’ prim mother much of a fan. Jules and Jess are inseparable on the pitch and off until their crush on coach Joe (Jonathan Rhys-Meyers) inserts a hormonal wedge.

You’d have expected this kind of film off the success of the ascent of the U.S. women’s national soccer team, but the United States has no half-baked assimilation to lampoon. It’s for the best. Chadha grinds her melting pot movie into cliché. Which gets her at least a yellow card.