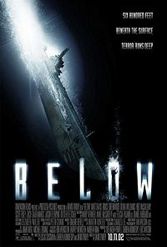 A pleasant surprise. Director David Twohy (with help from screenwriter Darren Aronofsky) concocts a decent thriller based on an B-movie conceit: ominous tidings in a doomed submarine. Unlike Twohy’s previous “Pitch Black,” this one has little need for visible monsters.

In World War II, the USS Tiger Shark rescues three-person party from a torpedoed British hospital ship, including a medical officer, a disfigured patient, and a nurse called Claire (Olivia Williams). Women are bad omens on subs, but this boat is already contaminated. The captain has mysteriously gone overboard, the crew is moody, the Germans find the vessel and depth charge it. All this is plebian. What’s not is how the captain’s death, the crew’s mood, the presence of the disfigured man, and the hospital ship sinking grow menacingly connected.

Bruce Greenwood as acting exec Lieutenant Brice keeps the “amissness” in check until it’s clear everyone has every reason to be afraid. It’s the way intelligent people gradually lose their heads that worries you, and that’s the anxious first sign of an effective nail-biter