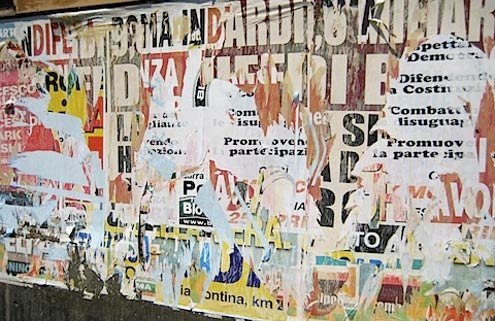 When the vacation sheen wears off, you're left with one tough city.
F

When I touched down in Rome with friends in 1999 on my first big foreign trip I was awed by the monuments, the churches, the ciaos, the arrivedercis, the food, and even the sirens of the zipping carabinieri patrol cars. Everything about Il Bel Paese and Mamma Roma captivated me.

At the time I was 20, naïve, and carefree. Good times. And they went very well. I met a sweet Italian boy who swept me off my feet and made me want to move to Italy a tutti costi (at all costs). He is now my husband.

So, when female students these days excitedly ask me about my past and how I got here, wanting to know how they can transform their four-month study stint into a life here, I take a deep breath and pause.

I hate to be cynical with them or anyone else for that matter, but the reality is unless that unless you’re prepared for it, Rome can be a very hard city to live in. Jobs are few, salaries are low, and just getting paid can be a task.

Though Italians generally know how to live life to the fullest, times have changed measurably since I got here a decade ago. To the dismay of many friends and family back home, the fantasy existence is gone. Virtually no one (including me) spends their days lounging around sipping cappuccinos in the middle of Piazza Navona. These days Italians toil just to get by.

Since I work often in the tourism industry, my job is to peel away the layers of this gorgeous city one by one to give tourists the same awestruck sensation I felt when I first got here. That’s the easy part.

The trouble comes after the vacation. What Hollywood doesn’t show you is that most Italians average a measly €1,300 a month in take-home pay. And those are the lucky ones.

Most “young” Italians find their first real job in their late twenties, and if they’re lucky can count on pulling in around €900 a month. Add utilities and other obligations and younger workers rarely get to €20,000 a year. According to statistics released recently by the finance ministry, more than 20 million Italians make less than €15,000 a year, with the Rome area averaging about €22,000.

Yes, many Italian children are coddled and run to mommy and daddy when they need a financial boost. But with salaries like these can you blame them? It’s no wonder young Italians have trouble becoming self-sufficient. They couldn’t live on their own if they wanted to.

Why? Try to cost of living. The average cost for decently sized Rome apartment (something around 50-to-60 square meters, or 600-to-650 square feet) could set you back anywhere between €800 and €1,000 a month, not including utilities.

That Trastevere apartment you were dreaming about? Unless you’re thinking about renting a room for €600-€700 a month or have a trust-fund income, forget about it, at least on an Italian salary.

Want to talk about gas prices? I’ve noticed many fewer cars on the road in recent months. While that may be a good thing for traffic-haters, ecologists and environmentalists, the downturn doesn’t represent a sudden love for the green movement.

Gas prices are now hovering at about €1.8 per liter. Consider what that means in SUV terms. The average family SUV has a capacity of more than 20 gallons. Filling it up in Rome at current exchange rates would cost you roughly $175. Times are tough and people are struggling.

Yet many young Americans are oblivious. And rightfully so! Who wants Debbie Downer nonsense when you’re on vacation?

Now then, back to my long pause when I’m asked about the prospect of moving to Italy. My first question is age. If those asking me are in their 20s, I say a leap of faith is just that; a risk is a risk and some are worth taking. To those in their 30s or older I borrow a page from the Silvio Berlusconi playbook, as in: “Find a rich boyfriend.”