Bella Ciao, and memories of a man 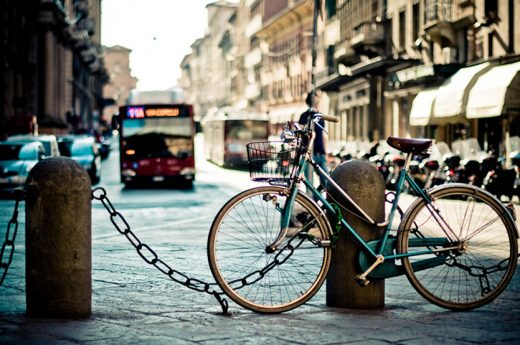 Cycling alongside the porticos of Bologna thinking of a song.
R

ecently, I played “Bella Ciao” for my students. I first heard the song as a college student in Bologna. I would ride my bike through Bologna’s streets, alongside the porticoed sidewalks, the wind blowing in my hair, the song playing in my head.

My friend Paolo, a fellow history student, had introduced me to “Bella Ciao,” a 19th-century rice harvesters hymn that the Italian Resistance later adopted as a hymn to their anti-Fascist cause. He was a Milanese per bene, or clean-cut, who wore cashmere crew sweaters, stylish glasses and Aqua di Giò cologne.

Paolo was in the youth league of the PDS, the Partito democratico della sinistra, the post-1990 segue of the Italian Communist Party. The PDS, later to become the more mainstream Partito Democratico (PD), had offices all over Bologna, a longtime leftist bastion once nicknamed “La Rossa.”

I didn’t know much about Communist history, but the values Paolo espoused —immigrants’ rights, social welfare, and a low boil dislike for cut-throat Capitalism—aligned with my own.

I didn’t know much about Communist history, but the values Paolo espoused —immigrants’ rights, social welfare, and a low boil dislike for cut-throat Capitalism—aligned with my own. Our friendship quickly morphed into a tender courtship. In the small, red, Chinese-print diary that I kept that year, I wrote, “We wanted to watch the sunrise, but ended up kissing in front of the Zanichelli Publishing House… My eyes hurt, so he kissed them.”

Another night, Paolo made risotto, which took the requisite two hours. It was late, so he insisted that I stay over. “He gave me a Mark Twain t-shirt, and he wore proper striped pajamas and read a book about the Partisans,” I wrote. Apparently, a little later, I felt sick, so Paolo made me Chamomile tea. And, he made me laugh —telling me about his impressions of America the year he was an exchange student at Berkeley. He didn’t like fudge, a friend of his threw up after eating too much meatloaf, and Paolo was so homesick that he cried every day. “He was so sweet, and I was so nervous,” I wrote, “but I loved the compassion that I felt, the caring.”

Paolo was a perfect gentleman, and my diary reads like a primer in good men. Paolo said lovemaking was “the most beautiful thing in the world, and there is no closer way of being together with another person,” I wrote. “But I didn’t want to, and he insisted on walking me home in the rain. It was lovely and romantic —and silent. He asked me what I was thinking, why I was always so silent.”

Paolo was a little grassoccio, or chubby, and bald. He reminded me of the Roman cookie, brutti ma buoni, homely but good. “As he touched me, all I could think about was the hairy mole on his hand,” I wrote.

But the problem was not Paolo. I normally went for minds, anyway, and Paolo had a good one. He also had a good heart, capable of peering into my own (hence his question about my characteristic silence). I was simply not interested in “serious” relationships then, which to me meant sex. Still a virgin, I’d gone to Bologna to study, and study I did: doubling up on my course load, living with Italian students, and even writing diary entries in the Italo-English that I still use.

The song “Bella Ciao” was born as a 19th-century peasant tune, but later adopted by the Italian Resistance during World War II.

If Twitter had existed, my hashtag would have been, #MeFirst. That’s not as selfish as it sounds. Before going to Italy, I had thought about going to a women’s college, touted as safe havens for women to develop their minds without the distraction of men. Italy, instead, was my safe haven. My #MeFirst thinking, similar to that in many spiritual and wellness schools of thought —for both men and women — is that to be of service to others you must first know, and nurture, thyself.

Despite my disinterest in having sex that year, my experience was still charged with sexual energy. The way my roommate whispered in Italian raised the hairs on my arms, and I found beauty in the luminescent but melancholic blue eyes of the film student Giuseppe, another fling.

After the movie, Paolo walked me home like usual, and he tried to kiss me. “It’s exhausting to have these men with whom I want friendship,” I wrote.

Eventually, I cut things off with Paolo. That night, I insisted he not walk me home, which he agreed to, if only because he had a fever. “He had a few tears in his eyes.”

I’ve been thinking about Paolo amidst the #MeToo explosion of sexual assault stories. I’m grateful that I’ve never experienced anything like these stories, and that my introduction to sexuality was sweet, as it should be. Paolo respected my ‘no,’ then simply bid me farewell, leaving me with a beautiful song that still plays in my head.