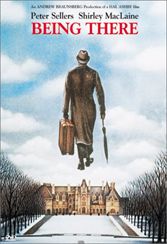 Though overrated, this remains a pleasure thanks to Peter Sellers. His laconic, dimwitted gardener (Chance) is probably the best idiot savant ever put to film. Like Dustin Hoffman in “Rain Man,” Sellers finds a nook of diffidence and inhabits it. This is above all a parody of television, elitism, and vanity in which the powerful are always afraid of looking bad. The novel and screenplay belong to Polish novelist Jerzy Kosinski, who loathed poseurs. Tycoon Benjamin Rand (Melvin Douglas) stumbles upon Chance (by chance) and finds his comments about gardening and life profound — “As long as the roots are not severed, all is well. And all will be well in the garden.”

The aging Rand promotes this “wisdom” to Washington’s movers and shakers, who gladly mistake idiocy for insight. Being all there doesn’t matter to poor Chance, who is merely aping what he’s seen and heard on TV, which to him is great and grand news. Soon, he’s Chauncey Gardner, a placid philosopher, and the movie tilts toward outright pathos. Director Hal Ashby got a parting gift from Sellers, who died (at 54) within a year of its release.