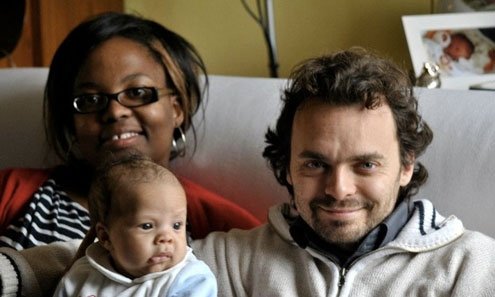 ast September, Italian freelance journalist Federico Bastiani and his South African-born wife Laurell decided to try to fill a void. The couple had been living on Bologna’s heavily residential Via Fondazza for three years but Federico’s work schedule combined with day-to-day distractions had kept them from making friends. Their isolation left their 20-month old son Matteo on his own. When his parents looked to set up play dates they just didn’t know where to turn. “We could hear other children around us,” says Federico, “but we couldn’t just knock on doors to ask kids to come out and play with Matteo.”

Federico knew he had dozens of neighbors but they rarely seemed to converge. What could he do, he wondered, to forge a real community? After talking it through with Laurell he decided to create a Facebook group called Residenti di via Fondazza – Bologna (Residents of Via Fondazza).

He saw the idea as a no-cost project that, with luck, might create a small circle of local residents. “I knew there were apps out there that connected people to others,” says Federico, “but I had a more specific goal: to find some friends for Matteo, and maybe for us.”

After creating the page, Federico decided to publicize it the old-fashioned way. He printed out 50 flyers and stuck them in communal spaces and along the street. “Basically, I explained my problem, and how eager we as a family were to socialize with others.”

The posters invited Via Fondazza residents to join his Facebook community and speak their mind about local goings on. He hoped others around him also wanted to meet their neighbors, or had a question, or were just looking to get rid of old furniture.

Though the Pisa-born Federico, 37, was sure he was on to a good idea, he had no concept of how good. Two weeks after its start, his page already had 93 “resident” followers. As word of his virtual community effort spread, so did interest. Within months, supporters grew into the hundreds, with the Facebook page turning into a clearinghouse for neighborhood needs.

The expanding Via Fondazza group finally decided to give the project a name, “Social Street,” the first of its kind in Italy, with its own website (“Start your own social street!” reads a homepage headline). Soon, Italian media began talking to Federico and Laurell, helping to extend the reach of the project and inviting other communities to follow suit. There are now 44 “social street” projects in Bologna alone, 150 in Italy, and several abroad. Not bad for an idea generated by a play-date crisis.

As the phenomenon spread, Via Fondazza was visited by reporters eager to know how Federico had come up with idea, if it had changed his life, and whether it was profitable (He dashes the profit part: “It isn’t. That’s not the point.”)

Federico’s fame eventually landed him a guest blog on Il Fatto Quotidiano, an Italian national daily started in 2009 and known for its strong online presence. “I wanted to recreate that sense of community I felt growing up [in the country] but never felt in the city, mostly because work commitments made meeting neighbors and locals next to impossible,” he wrote in his first post.

“These days, ‘social’ means having a presence on Twitter, Facebook, and Linkedin,” says Luigi Nardacchione, an original member of the Via Fondazza group. “It doesn’t necessarily mean knocking on your neighbor’s door to ask for some milk, and return the favor the next day.” The retired Nardacchione, a self-styled Fondazziano, as group members call each other, spends his much of free time helping residents connect.

“People are eager for stories,” says Federico. “I had a birthday party at the bar around the corner and hoped maybe 20 people might show up. Instead, because they knew about it, 100 people came.

“A lot of the people there were familiar faces,” he adds, “ones I see every day. But I’d never had the courage to say hi to before.”

The project has been helpful in unexpected ways. “A girl whose printer broke down the night before a paper was due posted an SOS on the group page and a neighbor promptly came to her rescue,” Federico tells me.

When I met Federico and Laurell for coffee on a Saturday morning, Matteo (who now has more play dates than he can handle) was perched atop Luigi Nardacchione’s shoulders. Fondazza Social Street headquarters is a nondescript coffee house where we sat on plastic chairs and drank cappuccino. There, Saverio Cuoco, a Fondazziano who helps coordinate the various Italian social streets, insists that the project, while virtual because of its online character, is all about personal interaction. “We’re not event planners. We’re about sharing for real. Don’t expect to find a list of cool things to do on our page. You’re more likely to find somebody saying that they need a table or a plumber or offering baby sitting services.”

One event it does publicize is “Mummy Cinema,” yet another Bastiani family project. “Moms can go to the movies with their babies and breastfeed,” explains Laurell. “They don’t have to worry if their child starts crying in the middle of some crucial plot twist. Everyone there gets it.” The local movie theater has proved too small to cope with the demand created by the Mom Movies idea so the owner has decided to offer a larger venue, also nearby.

Throughout February, an brick wall on Via Fondazza, once part of an urban enclosure, will highlight portraits of local residents as part of a month-long exhibit called “Volti di Via Fondazza” (“Faces of Via Fondazza.”) A Pakistani immigrant and deli-owner named Massoud, who speaks only basic Italian, offered his deli as a “studio.” A local copy store printed out the images at cost. “I was raised to believe in solidarity: help others when you can,” says buoyant copy storeowner Marco Betti.

A brown office desk sits improbably in the middle of his shop, among paper supplies and printers. “A girl needed a desk and I don’t need this one,” says Betti. “So she’s coming around to pick it up. What do I get? A thank you. And that’s always nice to hear.”