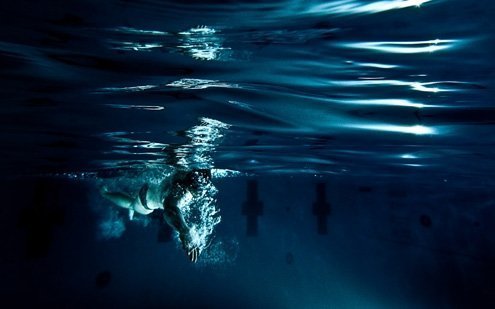 I had a dream I was on an old rickety dock, dragging a small boat to drop into the water.
I

sat in the shade while I readied my fair Irish skin for a swim underneath the warm Key West, Florida sun.

A couple across the pool from me caught my attention. He was a good looking, strapping man, maybe in his early 30s. Beside him was his wife, pretty, petite, with long reddish hair and big sunglasses. She reached down with both hands to move her leg and I noticed she had only one. The other had been amputated just above the knee. The white scars that marred her entire lower body shone bright in the sun.

She turned her head and quietly whispered something to her husband. Immediately he sprang from his resting place and gently picked up her fragile body, cradling it to his chest like a father with a newborn baby. She didn’t grab hold of him tightly as you might expect. Instead, she lightly wrapped her arms around his neck and shoulders, in complete trust.

He carried her to the side of the pool, squatting down as far as he could, and ever so gingerly placed her in the water, still cradling her body in his arms, smiling down at her, until she smiled back and nodded for him to let go. He slowly released his arms and she, holding on to the side of the pool with one hand, let herself float. He slid into the pool beside her, ever watchful.

It was an intimate, yet lovely interaction and I felt honored to have witnessed it. Though I wondered to myself who was the more fragile out of the two of them. The proverb (of Slavic origin I believe) came to mind — “Man is harder than rock and more fragile than an egg.”

My thoughts were interrupted by an elderly couple beside me. When asked what he wanted by the pool waiter, the man hesitated, then fumbled for words, forgetting what he’d wanted. His wife spoke up and reminded him softly that he’d wanted the turkey club. Yes, the turkey club….

As I listened to the conversation, I considered how frail us humans really are, both in body and mind.

I’ve long been aware of my own frailties and weaknesses as a woman, a mother, a daughter, a lover, a friend, and as a human being. I’ve accepted them, without letting them rule me. But I’m keenly aware that life is very fragile, and like the egg, can change in the blink of an eye.

As an independent woman, I’d be lying if I told you it doesn’t frighten me, though.

It isn’t my mortality that scares me by the way — it never has. That’s not to say I want to die anytime soon. On the contrary, I hope to continue living a long, healthy, deeply satisfying and interesting life. What does frighten me is the idea of becoming more fragile as I age, perhaps needing to depend on someone else to guide me into ordering my turkey club or place me in a pool of water.

The whole scene around the pool affected me so much that that evening I had a dream I was on an old rickety dock, dragging a small boat to drop into the water. Suddenly the dock began to sway and rise so high up in the air that the drop off to the water was that of a small cliff. I lost control of the rope I’d been clinging to and my boat dangled between two pilings. I crawled on my hands and knees to the end of the dock as my legs had ceased functioning properly. There, an old man stood on the grassy hillside below, looking serene and calm. I began to panic and cry and explained to him that I needed help, I couldn’t do it alone, and asked that he please help free my boat, so I could be safe. He smiled — “Of course, young lady. Let’s see, where’s the ladder? I used to sail these waters all the time.” And he began climbing to the top of the dock.

I woke frazzled, the sun peering through the curtains, but instead of getting up I remained still, staring at the ceiling fan above me, replaying my dream over and over again before it was lost.

I’ve resigned myself that there is little I can do to prevent an accident, dementia or simply life and age from weakening me, and am aware that eventually, like it or not, I may need a soft voice to remind me I want a turkey club, trusting arms to carry me into the shower, or someone to help secure my boat to the rickety old dock.

Likewise, I’ll gladly do the same for someone else.