Being dead is no excuse 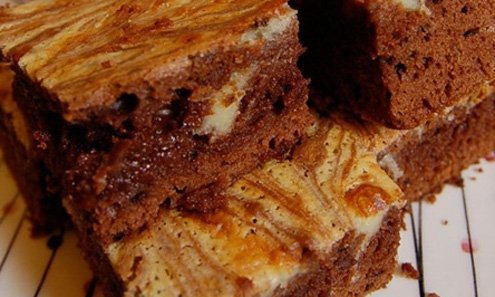 Making brownies can be an antidote to the pain. But be creative.
C

hestnuts roasting on an open fire, bread baking in the oven, fresh-picked fruit simmering into jam while flour-covered children camp out at the knees of their mothers and grandmothers in the kitchen: Making sweets is what sweet memories are made from.

Somehow I missed out.

It’s a standing joke in our family that when my parents married my mother couldn’t bake a potato. We ate only rice. It wasn’t her fault. She’d been raised in China and had no “American” training. She was the child of a Russian mother and a Paris-born father (who in turn had an English mother and a Turkish father). Confusion must have reigned in that kitchen.

My grandparents spoke of fabulous dinner parties where servants served my grandmother’s famous Sukiyaki. Rivers of vodka livened up parties. The guest-book was kept in the toilet.

My Russian grandmother taught me to make borsht and piroski, but not in the traditional way. Immigrants tend to recreate recipes based on what they find in their new homes. The original recipe gets a twist. She used Pillsbury pre-made biscuit dough for the piroski and canned beets for the borsht. My grandfather, from his French side, made French breakfast pancakes. On my father’s side was Grandma May, who each morning scraped burned toast to partner her tea. In the evening she sipped sherry and watched the Lawrence Welk Show.

These are early childhood recollections and I admit my memory is fuzzy. Starting at age 10, funerals were a major part of my life. Our family — we lived in California — was not large. My mother’s brother died first. She then lost a child at birth. My brother, sister and I were sent to live with other families to ease that shock and my father’s subsequent burden. Each year we seemed to lose another family member: my father; my paternal grandmother; my maternal grandmother and grandfather, and much later an aunt and her son — who was only a year older than me. We became funeral experts.

Gathering friends and family at home following a funeral service is an American tradition. Food is the common denominator. If “feed a cold and starve a fever” applies to illness, there must be a saying that suggests eating as a way to fill death’s void. Perhaps, “Eating to feel more alive.” We ate ham, ham and more ham. There was also lasagna, mostly brought by others. It was easily frozen and reheated. Only recently did I return to eating cooked ham. I’d associated it with painful memories.

Death and food form an ancient bond. In Turin I recently saw an exhibit of Egyptian tombs with frescoes of banquets intended to accompany dead souls into next world. Etruscan tombs in Italy have similar frescoes. The Mayans filled graves with utensils and bowls of food. Death deprived breath but not appetite.

Every culture has a “nutritional” way of approaching death. Jewish people “sit Shiva” for seven days. The Chinese celebrate with a seven course banquet. The Irish hold alcohol-rich wakes that abound in music and song.

But Italians hesitate. Food isn’t a mainstay at a Tuscan funeral. Death is an off-putting subject. This seems strange for a culture that revels in banquets at weddings, baptisms, anniversaries and birthdays. Superstition prevails over commiseration.

Food should comfort the grieving. Which brings me to chocolate. It’s the ultimate death food. It soothes and elates. Research suggests that the phenyl ethylamine (PEA) in chocolate creates a neurological response similar to that of falling in love. It helps you face the difficulties ahead.

The next time you attend a funeral, my advice is to leave the baked ham, jello salad, macaroni and cheese and lasagna at home. Go for chocolate.

I’ve created an Italian-American brownie, based on the ingredients in tiramisù. Tiramisù means “pick me up” and began as a nutritional supplement to a poor diet. My recipe is based on the American Marbled Brownie and tweaked to include the richest tiramisù flavors.

Using the same recipe, I also concocted an espresso brownie. Mascarpone helps make the swirls, reflecting the marbled paper so famous in Florence. I used Flo Braker’s recipe for Marbled Brownies from the “San Francisco Chronicle Cookbook” as inspiration.

1. Melt the chocolate with the butter over low heat, stir. Let cool.

2. Combine the flour with baking powder.

3. Whisk the eggs with the sugar, until light.

1. Whip the mascarpone with the sugar.

Pour 1/2 the chocolate mixture into the prepared pan.

Cover with the mascarpone cream. Top with the remaining chocolate mixture, in drops. Using a knife, first cut through the batter lengthwise, then crosswise, to create the effect of the Florentine marbled paper. Repeat if necessary to create a design of your own. Swirl after if you like.

Bake for 40 minutes. Cool before cutting.