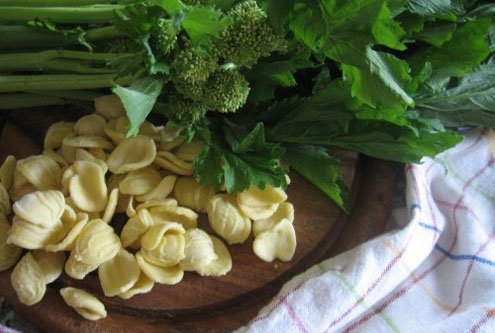 t started with a seed. A hundred years ago, or three generations, or the time it takes an olive tree to bear fruit, a farmer planted an olive tree. Little did he know his small farm in the wild, rolling hills of Basilicata, where the wolves still howl at night, was going to produce a rich, nutty olive oil. An oil his great grand kids would grow up enjoying.

My path crossed this old farmer’s when I was driving a pint-sized Smart car through his native land, more famously that of Francis Ford Coppola. It was primo maggio, or May Day, a national holiday in Italy. It fell on a Thursday so, naturally, it was a four-day weekend. While I try to avoid the worse Italian habits — cigarettes, not leaving the house if it might rain — some of their traits I go along with quite willingly, like extra vacation days.

With an American friend, Melissa, who also lives in Rome, I set out on a road trip to visit a friend of hers in Lecce, Puglia. Her friend, Lele, short for Gabriele, and I will be opening an Italian restaurant in New York some day, with the help of a Kennedy, who he somehow knows quite well. We shook on this over a bottle of Negroamaro just hours after meeting.

While Lele is a great guy, this story is not about him, but a dinner. A simple dinner I have once a week with Melissa. We alternate between our apartments and try new recipes we have heard or read about, or recreate dishes we have eaten in a restaurant, or been taught.

Dinner this week was orecchiette alla cima di’rape, fresh ear-shaped pasta with broccoli rabe. The recipe, traditionally from Puglia, I had learned at Pierluigi, the restaurant where I work once a week, from the pasta chef Antonio, from Matera, Basilicata’s major city. He explained the recipe while he and I were paring down a heap of broccoli rabe to just the most tender leaves and stalks. I had never tried broccoli rabe before and its flavor had an interesting effect on me. The bitterness made me think of the days when I was younger, with a less developed palate, and would try to rid my plate of all the broccoli by any means possible — other than actually eating it.

Just a pasta dish didn’t seem like enough for dinner and I wanted to do something else. I recently found inspiration in some porcini mushrooms I had at dinner with my aunt and uncle when they took me out to Al Presidente, one of those restaurants generally out of my budget, but that I have been dying to try. I didn’t ask how they were prepared but guessed they were done in the same manner I would prepare a nice cut of meat, seared on the outside and then finished off in the oven. Between my desire to see if I could match the restaurant, and the fact that I passed a lady selling nothing but mushrooms in the market I was sold. Mushrooms to go along with the pasta.

It was my turn to cook, so Melissa sat down and opened a bottle of wine while I got to work. The wine was an Aglianico del Vulture, which comes from ancient vines originally brought to Southern Italy when it was still known as Magna Grecia. The word Aglianico itself, through centuries of mispronunciations, comes from the ancient word for Greece, Hellas. A sliced ball of mozzarella, which we picked at with our fingers, went with the wine as an appetizer.

When the pasta was done, al dente of course, I spooned it out of the water and added it to the pan with garlic, oil, chili peppers, which I left in whole because Melissa likes them, and the broccoli rabe. I stirred that all up for about three minutes until it was good and mixed and it was ready to go. The mushrooms came about at the same time and we sat down.

The pasta came out just as I wanted, but the mushrooms needed a change or two. Next time I think a higher oven temperature, maybe 220C (425˚F) instead of 160C (320˚F), and some salt in the pan along with the coating of oil. However, they were still delicious, especially with a little extra oil, the rich, nutty kind from Matera, drizzled over the plate.