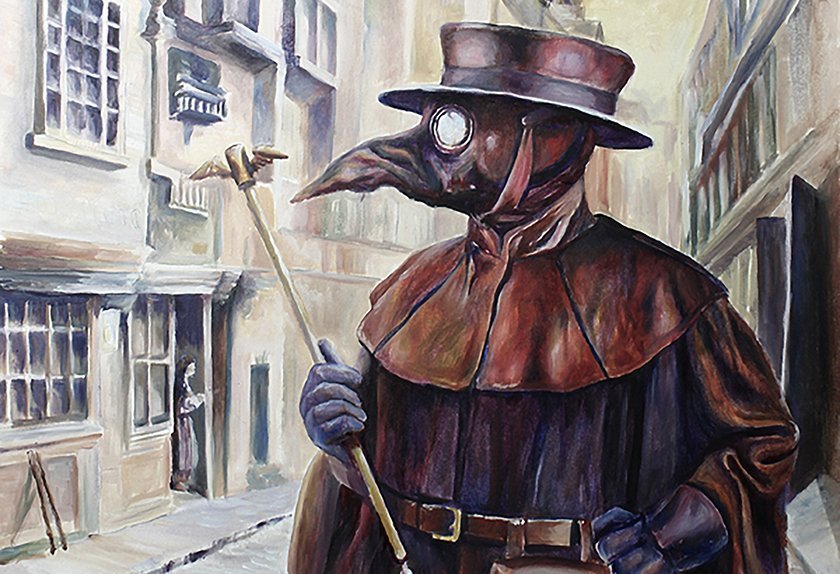 Edgar Allen Poe had his own idea of what might lurk behind "medicinal" appearances.
M

asks have been the undisputed protagonists of the coronavirus pandemic. We have moved from early warnings that their use served no purpose in preventing contagion, to recommendations in their favor, to regulations that have made them mandatory in some nations. At the heart of the mask debate is its purpose: are they intended to defend the wearer from contracting the virus, or is their main function to impede the infected from spreading it through sneezing, coughing, or close-proximity breathing? In essence, do masks keep the virus in or out?

The developed world is new to these dynamics, but such questions have recurred through the centuries, arising each time a plague ravaged humankind. Perhaps the most celebrated image of masks in this respect is that of the Plague Doctor. So-called Plague Doctors were medical doctors that treated patients infected with the bubonic plague, also known as the Black Death. Their hermetic outfits, which began to take hold around the seventeenth century, consisted of a long tunic made from wax canvas, gloves, a wooden cane to examine patients without touching them, and a singular mask with glass eye openings and a beak. The beak was usually stuffed with herbs and spices, including camphor, mint, laudanum, ambergris, and myrrh, the mixture intended to filter air from the miasma of the pestilence.

The beak was usually stuffed with herbs and spices, intended to filter air from the miasma.

Plague Doctor masks were so emblematic that they even made their way, many years later, to the tradition of the Venetian Carnival. In an interesting paradigm switch, which is the very essence of the carnivalesque tradition, the sinister Plague Doctor became a popular, picturesque character in Italian culture.

So, plagues, medical masks, and masquerades. Any fan of Edgar Allan Poe will already know where all this is leading. Indeed, Poe’s “The Mask of the Red Death” has been in my thoughts since the beginning of the coronavirus pandemic. Possibly one of Poe’s most popular stories, “The Mask of the Red Death” is set in 14th-century Italy, within the background of a fictitious, terrifying plague Poe dubbed the “Red Death,” characterized by “sharp pains, and sudden dizziness, and then profuse bleeding at the pores, with dissolution. The scarlet stains upon the body, especially upon the face of the victim, were the pest ban which shut him out from the aid and from the sympathy of his fellow-men. And the whole seizure, progress, and termination of the disease, were the incidents of half an hour. In the tale, Prince Prospero, a “happy and dauntless and sagacious” nobleman with an “eccentric yet august taste” attempts to escape the plague through isolation. He and a thousand friends among the knights and dames of his court seek refuge in one of his castellated abbeys.

Prospero took all the necessary measures to ensure that the pestilence remained out of his premises: “A strong and lofty wall girdled it in. This wall had gates of iron. The courtiers, having entered, brought furnaces and massy hammers and welded the bolts. They resolved to leave means neither of ingress nor egress to the sudden impulses of despair or of frenzy from within.”

Precisely this motif of what is locked in and locked out pervades the entire tale until its momentous conclusion.

Having locked the plague outside and the healthy inside, Prospero saw no reason to refrain from enjoyment. “There were buffoons, there were improvisatori, there were ballet-dancers, there were musicians, there was Beauty, there was wine. All these and security were within. Without was the ‘Red Death’”. Confinement in the abbey had lasted for a few months when Prospero decided to hold a masked ball. The tale keeps unfolding in all its Gothic atmosphere, until a mysterious guest makes his appearance at the ball.

“The figure was tall and gaunt, and shrouded from head to foot in the habiliments of the grave. The mask which concealed the visage was made so nearly to resemble the countenance of a stiffened corpse that the closest scrutiny must have had difficulty in detecting the cheat. (…) His vesture was dabbled in blood — and his broad brow, with all the features of the face, was besprinkled with the scarlet horror.”

How dare someone ruin the good mood of his party by evoking the pestilence?

The provocation of the stranger enrages Prospero. How could someone dare to ruin the good mood of his party by evoking the pestilence with such a costume? Until the concluding moment in which he discovers that there is nothing under the mask of the stranger and realizes that he is a manifestation of the plague itself, bringing death into his secluded, allegedly safe space.

One of the most recurrent interpretations of the story is the inevitability of death. Although financial means determine the further fortification of the anti-plague measures, the disease will eventually pay no heed to the social class of its victims. Yet what most interests me is the in/out paradigm.

The motif of masks in our daily lives makes its presence felt throughout world literature, from ancient Greece to dramatist Pirandello to the poet Ferdinand Pessoa, to mention but a few. At what point are we transformed into the mask society forces us to wear? The very etymology of the word “person” comes from the Greek πρόσωπον (prosopon), referred to the mask used in Greek tragedy and the role of the actor wearing it. After all, masks in Greek tragedy were not used to hide a face but to stress the actor’s role in the play.

With his astonishing, unmistakable versatility, Poe mixes the motif of masks in terms of identity, with the question that still haunts us: do masks keep the pestilence in or out? In a paradigm which is the exact reverse of the Plague Doctor I was discussing above, the mask of the deadly stranger of the Poe tale moves from a carnivalesque dimension into a repository, itself a vessel. Unlike the Plague Doctor, the mask of the intruder is not a beak filled with spices intended to keep the pestilence out. On the contrary, it carries the plague within it, causing “Darkness and Decay and the Red Death held illimitable dominion over all.”