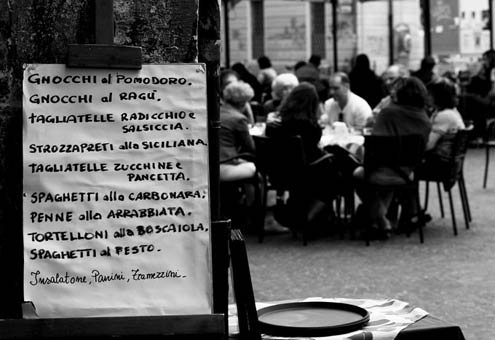 t started with a plate of pasta. Spaghetti had been the only word I recognized on the menu, a safe choice, or so I had assumed — but heaped on top of my dinner were funghi, which apparently meant mushrooms, their offensive smell invading my nostrils, their sour breath taste palpable even when corralled to the edge of my plate. I fumed.

I was 12 years old and it was my first time in Italy, an experience that was, at least in my father’s opinion, long overdue. While I was content to spend August as I had June and July (ruminating over the imminent start of middle school and dousing my hair in lemon juice, praying for highlights) he had other plans. Plane tickets to Calabria were purchased, where the majority of his (or, I supposed, our) family lived. It would be a three-week stay.

The funghi incident was the most recent in a string of exasperating food experiences. Ignorant of Italian, reading a menu and ordering were daily burdens. While my father enthusiastically conversed with our aunts and uncles, people who shared my eyes but not my language, I was often left with the task of ordering for myself. What should’ve been a wonderful introduction to Italian culture (Amatriciana! Gnocchi! La Fiorentina! crowed my guidebooks) inevitably ended in disappointment. Breakfast consisted of pieces of dehydrated bread and coffee, while waiters looked at me dumbfounded when I insisted my pasta was enough, and no, I did not want veal or chicken or fish too.

I had repeatedly purchased water that was bubbly and unsatisfying (frizzante, I would later learn). A waiter instinctively slapped my hand away when I reached for cheese to sprinkle over my arrabbiata. The grapes my aunt offered me looked sweet and delicious on the plate, but my sentiment quickly vanished as I bit into a seed, its center splintering in my teeth.

But despite this, the south of Italy was strange and beautiful. The water was so clear I could see tiny silver fish darting past my toes like arrows, and women stretched out on the beach half naked, their chests jutting proudly towards the sun.

The heat was merciless but my siblings and I were ushered into cool rooms with clean white sheets to nap after lunch, our new relatives quietly clicking the door shut before we fell asleep to the soft hum of their voices. Bodies were buried above ground, great marble coffins adorned with poppies. I saw my great grandfather’s grave and when no one was looking pressed my hand to it.

The trip continued on. I slowly was able to recognize food vocabulary (formaggio, cheese; melanzane, eggplant; funghi, funghi, funghi; mushrooms) and began to relax about mealtime. Instead of sulking and finding myself incredibly frustrated over my utter lack of Italian (glaring moodily at toddlers whose verbal skills were superior to my own) I began to accept, and even embrace it. With the chatter of others a mystery, advertisements unable to be deciphered, and TV nothing but a beautiful but meaningless melody, I began to live Italy in a simpler, perhaps richer way.

Museums were to be experienced not by reading the placards but by carefully examining the painting or sculpture before me. Communication with my great uncle was not in speaking but through an arm around the shoulder, a squeeze of the hand. I surrendered myself to the unknown of food, relying more on my sense of taste than verbal information that would’ve inevitably influenced my decision to eat or decline (otherwise, I never would’ve dreamed of trying rabbit).

The three weeks ended and I returned home. While I had come to appreciate my strange yet ultimately satisfying vacation, I knew the next time I returned would be, had to be, different. There were people I’d yet to meet, places to discover, questions to be asked.

I eventually went on to study Italian in high school, major in it in college, and then study abroad in Bologna. There I spoke constantly and poorly, then constantly and pretty well, maybe even very well. I went to university classes and chocolate festivals, I made friends in another language, I fell in love for the first time, I made silly and sometimes vulgar errors in Italian, I walked through the piazza at night and stopped to watch concerts, shows, soaking in what was around me. Now, living in Italy for the third year, my first vacation to Calabria now seems long ago.

A few months ago I went to visit a friend in San Marino, who graciously brought me to her favorite restaurant in the mountains. Despite my enduring dislike of funghi, I recognized tartufi (truffles) on the menu and was told the restaurant prepared them beautifully. They arrived, thinly sliced, their taste potent and rich, complex and delicious.

I savored every bite.