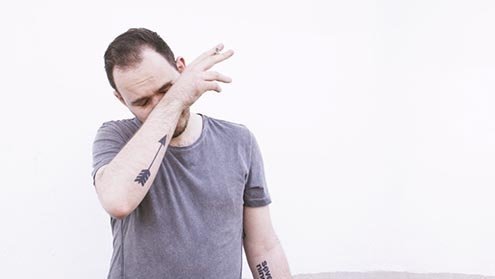 Berlin-based Ben Lukas Boysen is proving himself a neoclassical composer of the highest order.
W

hen you think of modern classical music and composition, it’s easy to associate its current practitioners only with independent movie scoring gigs or art exhibit installation ambiance. Yet there’s a thriving community of artists for whom traditional conservatory weapons (piano, violin, cello, etc.) are the driving force behind their creativity, not just a way to pay the bills.

Berlin-based Ben Lukas Boysen is among them. The composer, producer and sound designer has always been interested in audio — it will come as no surprise that he’s the son of an opera singer and was classically trained as a youth. Early experiments of his own led to glitch-based industrial IDM nom de plume Hecq. Boysen’s music as Hecq for the Kaleidoskop and Hymen labels was not atypical for German electronica in the early-to-mid 00s. But as the decade wore on, Boysen branched out. By the time he started releasing music under his own name in 2007 with Infinite Rounds, the seed had been planted for a new path.

Nine years and four albums later, Boysen has firmly established himself as more than just a man whose clients have included Amnesty International and Marvel — he is a neoclassical composer of the highest caliber. The latest example of his own work is Spells (Erased Tapes), a deeply emotional and luxuriously produced record. Though some credit must be given to Erased Tapes honcho Nils Frahm’s mixing and mastering, the music is all Boysen.

It would be disingenuous to say he’s never sounded better, however. Listening to Spells alongside 2013’s Gravity gives nothing away in time or quality; listening to both in succession reveals only miniscule differences. Boysen’s piano sounds resonant and melancholic throughout and there are even shared song titles between the two albums — Gravity‘s twin highlights are the Mogwai-esque “Nocturne” pieces and he’s reprised those titles with “Nocturnes” 3 and 4 on Spells. Songs generally drift between post-rock and ambient orchestral.

Even so, that smallest of differences between the two records can be found in the percussion. Have a listen to the eight-minute “Golden Times I” and notice how the kick drum takes the lead for the beat while the rolling rainfall of the cymbals and snare are buried further down the mix. Even the two “Nocturnes” seem to mix the drums differently, nestling them more comfortably in the mix than prior efforts.

Though piano takes the lead for many of these songs, other instrumentation also appears. Spells opens with “The Veil.” The long decays between key hits and distant flittering from string instruments set a mournful tone (which might be familiar to Ben Frost fans or anyone pays attention to the quieter moments of Godspeed You! Black Emperor songs). “Sleepers Beat Theme” features Lara Somogyi’s harp. “Golden Times I” slips in Anton Peisakhov’s cello. And Frahm’s work behind the boards remains omnipresent.

It is a splendidly approachable experience. From the ominous build of “The Veil” to the gentle closing of “Selene,” Ben Lukas Boysen continues his hot streak of modern composition by tugging all the right heartstrings. Anyone not familiar with the scene surrounding Erased Tapes and unsure of where to start would be well advised to look no further.