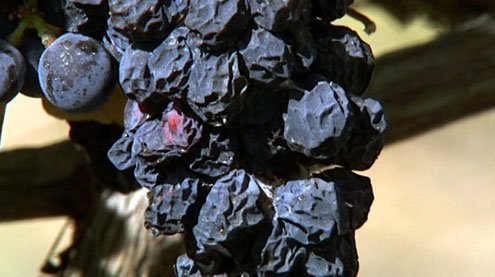 The heat is on.
T

alk to almost everyone in the Italian wine biz and they’ll tell you that local growers finished their 2009 grape harvest early. This year’s vendemmia, stunning in its early arrival, has winemakers chattering about good yields and high-quality fruit that is rich, flavorful and sweet, all good indicators that the year’s vintages should be of high quality.

What big growers and cooperatives aren’t discussing so openly is whether this year’s early harvest is attributable to climate change or just one of those occasional seasonal flukes brought about by a late summer warming trend.

But talk to the local farmers, folks who don’t necessarily have a huge stake in the commercial marketplace, and most will tell you that such an early harvest is unlike anything that they can recall happening over the course of their lives. Hard-core statistics suggest the 2009 grape harvest is the earliest in 30 years.

Wine industry experts attribute the head-start harvest to warm weather in March and April: vines germinated up to two-weeks early. This fact, along with continuing high temperatures later, meant that the vines flowered an average 20 days earlier than usual. According to climate-change experts, a long-term trend of this kind would force many of the world’s best-known wine-producing regions to consider radical changes to the styles of the wines they produce to remain competitive. As unsettling as that sounds, such change may be the only option for most wine producers, as they don’t have the financial means to literally uproot their vineyards (or, as Australian wine entrepreneur Tony Jordan put it recently, with plenty of dark, dry wit: “It’s going to be a damn nuisance picking up your vineyard and putting it somewhere else.”)

Media reports and wins books have already sounded the alarm. The refrain goes, “Can you imagine a world where your Barolo is made in Germany, your Chianti in Scandinavia?” Wine writers have also chipped in. “If you want to produce Burgundy-like [flavors],” British writer Robert “Oz” Clark writes ominously in his 2009 “Pocket Wine Guide,” “you’ll need to plant Pinot Noir in Holland and Belgium, maybe even on the Baltic coast.” Environmental scientist James Lovelock has noted the same trend, suggesting that farmers in the southwest English countryside of Devonshire have already contemplated planting olive trees.

But it doesn’t take scientists to see the fingerprints of man-made climate change. Recent hotter-than-average Italian summers have had a direct impact on the quality and quantity of local vintages, and on world crops in general. Italy’s farmers association has noted that the planting of olive trees, known to flourish in mild climates, had reached territories near the Alps.

Heat itself can be good for wines. Grapes harvested during a hot year in a warm climate can produce fine wines. Reports tracking Italian vintages say five years of hot summers have helped the country’s prominent wine-growing regions. But good news in the short term doesn’t make for a sunny forecast.

Two years ago, a Florence university study linked heavy rains and high temperature to wine deterioration in Tuscany. Simone Orlandini, an agronomist and co-author of the study, has gone on the record saying he’s convinced that temperature rises would continue.

Since high temperatures can cause grapes to over-ripen before harvest, the long-term prospects are cause for concern.

In August, French chefs, sommeliers, chateau owners joined Greenpeace in publishing an opinion-piece letter addressed to President Nicolas Sarkozy pressing for further restrictions on carbon emissions, considered the leading cause of global warming. Unless extreme conditions were checked, the “unique soul” of French wine was at risk, it read.

Soul is the least of it.

Proper wine making depends above all on sugar and acid. Sugar is required to balance out a grape’s acidity while the amount of sugar occurring in a grape is what determines the alcohol content of the wine. The longer grapes ripen on the vine, the more sugars they will have.

In hotter temperatures, grapes ripen more quickly and the result is an increase in sugar and a decrease in acidity. If a grape is picked when it is more ripe than usual, the wine can end up with a significantly higher alcohol level — reaching 16 percent. That’s well over accepted market values, never mind the liver’s response to high-alcohol content wines.

So if you like drinking powerful Italian reds like Chianti’s Sangiovese or bold Nebbiolo from Piemonte, buy a few bottles now. In 50 years, if they still exist, they may be bottled in Hamburg.