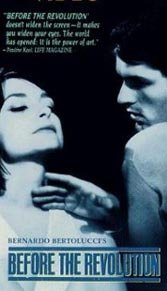 Half-a-century later, Bernardo Bertolucci’s early film still delivers a piercing portrayal of a young man’s journey to adulthood. Bertolucci made the movie — titled Prima della rivoluzione — at age 23, while still in the midst of exploring his own political doubts.

Fabrizio (Francesco Barilli) is a student from Parma, who becomes engrossed in radical Marxist politics to keep his bourgeois, middle class background at bay. It’s 1962, just before Easter, and Fabrizio has just left his church-going fiancé Clelia (Cristina Pariset). He is wracked by guilt and confusion over the death, a possible suicide, of his friend Agostino (Allen Midgett).

Though sullen and withdrawn, he gradually opens up to Gina (Adriana Asti), his stunning aunt, who visiting from Milan. They share a non-conformist worldview and are slowly drawn to each other romantically, an attraction they act on while knowing full well it can’t end well. Bertolucci gets into the hypnotic and heady romance through seemingly uncoordinated and jolted angles. Close-ups, shifts in focus, and panning, stylistically underline the quicksilver jitters of a young man’s mind.

The romance ends abruptly when Fabrizio discovers that Gina has had an affair with a stranger she picked up on the street. Choking on Marxist slogans about becoming a “new kind of man,” Fabrizio realizes he’s not cut out for this newness. He fails the revolutionary cause, in both romance and ideology, returning instead to established social norms, marrying his fiancé and putting shattered idealism and self-deception behind him.

This is a young, precocious, and profoundly giddy study of the impossibilities of love and failed revolutionary idealism. Its title is an ironic twist on the remark made by influential 18th-century French diplomat Talleyrand, who once said: “He who did not live in the years before the revolution cannot understand what the sweetness of living is.”