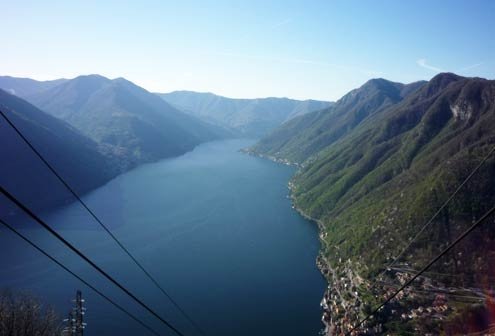 he villas that dot the sunny, western banks of Lake Como have long attracted tourists from all over the world. Lesser known are the trails linking the lakeside towns with the mountain villages overlooking the water and villas far below.

Today Marino and I are hiking from Argegno (200-meters) to Ossuccio on Lake Como in Lombardy. It’s an easy, three-hour hike up and over the lake with no more than a 90-meter ascent but with a sometimes steep, 600-meter descent.

We drive from Milan to Como where we take the last exit before Switzerland and follow State Road SS 340 to Argegno. We park at the church and walk up the steps on the side to the funivia on the SS340.

The Argegno funicular is a cable car with only two carriages that ascends 648 meters to the village of Pigra in four minutes. It was built as a lifeline between Pigra and Argegno, where ferries from Como and Bellagio dock. Our cable car rises almost like an elevator while the lake grows smaller in the distance below.

Pigra (860-meters) sits on the most beautiful terrace of the Comasche Pre-Alps. From here, we admire the entire Como branch of the lake and the green folds of mountains that dip into the water. The SS340 is a dark string outlining the curves of the shore while the villas are toy houses dotted along the road.

At Pigra we walk straight, past the post office and bibioteca (library) to a sign to Corniga. After an old washhouse, we keep right and walk to a simple building with Società Operaia written in large letters on the front. The Società Operaia di Mutuo Soccorso (SOMS) were workers’ association clubs, a kind of proto-union, formed in the late 19th-century and disbanded under fascism. They offered mutual assistance in newly industrialized Italy at a time when state healthcare and pensions were unheard of.

From the SOMS, we follow the road to a small shrine called the Cappella della Madonna del Soccorso. Here the road becomes a jeep track and the start of a pleasant walk through woods. It’s the end of a very warm March. A woodpecker’s rat-tat-tat heralds spring. The leaves are not out yet but wild cherry are in blossom. The pale white crowns of cherry trees give a ghostly phantom sheen to the grey woods and mountainsides.

Soon we reach the few houses of Cascina Lomia (800-meters) where, after 150 meters, the track narrows into a trail. With lots of turns, it descends Val Comoggia to the bottom of a gully. We cross a footbridge over a stream and then climb the other side to the hamlet of Serta (830-meters). So far, the wild flowers and colors have been delightful: green and yellow orchids, reddish-purple foxglove, blue spring anemone and periwinkles, and Reichenbach violets.

From Serta, a stone wall lines an up-and-down trail that leads to Corniga (760-meters). Here, stone houses huddle around the quaint church of Sant’Anna (1631 AD) with its large portico. Behind the church is a nevera, a cylinder-shaped icehouse once used to preserve milk and meat products. It’s now a terrace of a house.

“We layered snow and leaves,” an elderly gentleman explains. “It was better than any refrigerator.”

“We made sausages in December and kept them until August when the ice melted. There was never any freezer burn on the meat.”

From Corniga we take the path down towards the lakeside town of Colonno. We stop to picnic and enjoy the sun and view. Monte San Primo dominates the triangle that divides the two lake branches. Calm water hugs mountainous shores. Isola Comacina, the island near the town of Ossuccio, nestles in the bay off the peninsula, Dosso di Lavedo. Villa Balbianello, with its history of a licentious 17th-century cardinal and its salvation in 1919 by an American, Butler Ames, sits on the peninsula’s hillock.

As we approach Colonno, the path becomes a cobblestone road. After a small square, we go straight and cross the bridge over the Pessetta Stream. We take the road up to the Greenway. Completed in 2007, this is a 10.5-kilometer walkway and bicycle path along Lake Como from Argegno to Griante, near Menaggio. It is part of the Vecchia Via Regina, an old Roman road dating from 800 AD.

We follow the Greenway past Sala Comacina to Spurano, a hamlet of Ossuccio. We cross the SS340 to visit the church of SS Giacomo and Filippo. Listed on UNESCO’s world heritage sites, the church was first documented in 1169, though it is much older. Frescos date from the 11th-century while its curious belfry, which tops the church like an unfurled sail, is 13th or 14th-century.

Opposite the church is Isola Comacina, a small, uninhabited island rich in glorious and tragic history. In Ossuccio it is still called el castell, likely from the Latin castrum or refuge. It offered protection even in pre-Roman times and later became a Christian fortress against barbarian invasions. Byzantines and Longobards fought over it. Then, in 1169, all was destroyed. The islanders had allied with Milan in the Ten Years War against Como. They lost. Expelled, the remaining inhabitants fled to Varenna, a fishing village across the lake. The castle, churches and buildings were left in ruins. Only San Giovanni church and its 5th-century mosaics remained intact. Every year, on the Sunday nearest April 24, boats and fireworks on the lake commemorate the disaster.

We return to the road and buy bus tickets to Argegno at the coffee shop. As we wait, we look longingly towards Villa Balbianello. But that’s another story.