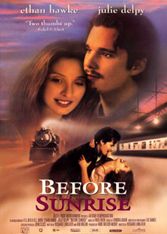 By conventional Hollywood logic, Richard Linklater bright little film didn’t stand a chance. Who really wants to watch two appealing stars … talk? But God is sometimes in the details, thankfully so, and the chance European meeting between American student Jesse (Ethan Hawke) and Frenchwoman Celine (Julie Delpy) on a Budapest-Vienna train turns into a charming romantic snapshot. This is about how people unexpectedly fall in like with one another. Linklater’s anti-vulgar approach is something of a marvel. His tender story line also draws incipient romance as it often is: curious, awkward, never obvious or crass. Followed by “Before Sunset” a decade later.