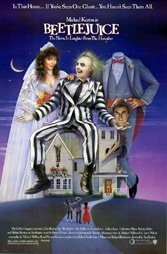 Haunted house flicks usually take three form, bad house (ghosts), good house (friendly ghosts) or crazy house (people who are sure of ghosts but have lost both head and mortgage).

Prince of Darkness Tim Burton rearranges the furniture by giving the gremlin black comic form — and what form! Michael Keaton, unrecognizable — and a license to romp. After loving honeymooners Alec Baldwin and Geena Davis — “the Maitlands” — die in a car crash, their house is sold to arrogant urbanites called “the Deetzes.”

To protect their ghostly terrain, the Maitlands interview and hire a contract ghost, a lethal weapon in a clown outfit. Haunted house satire morphs into guerillas warfare between unsuspecting living and hot-and-bothered dead that is no more dreadful than child’s play mischief.

Keaton’s adolescent, mime-driven Betelgeuse tops over-the-top but is never boring (“I attended Juilliard… I’m a graduate of the Harvard business school. I travel quite extensively. I lived through the Black Plague and had a pretty good time during that..”) Davis is a delight and Keaton a jitterbug.