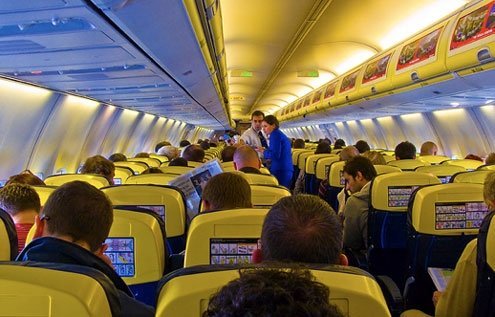 he girl knelt at the side of the queue for the flight, wailing. She punctuated her cries with shouts so loud, and so repetitious, that they gave even the most Italian-inept a shot at a new vocabulary; from her I learned my first swear words, gems like stronzo and testa di cazzo. She wore earmuffs, mittens, and had five different sweaters tied around her neck. Her tears streamed, her forehead perspired. Her nemesis remained unmoved. After all, she guarded nothing less than the sanctity of Ryanair’s rules.

A few minutes earlier, both Italian passenger and English stewardess had been involved in an altercation. The culprit: the girl’s carry-on. Two attempts to fit her suitcase into the size model were unsuccessful, despite a frankly impressive exhibition of both muscular strength and visual-spatial creativity. The stewardess shooed her out of line to sort it out.

Now here she was, on her knees, bag open before her, crying and shouting as two other girls, sisters or friends, repacked their own bags. Whether abashed or simply more Zen, they were much quieter.

Still, the Italian twenty-something man in line next to me grinned. “Italian girls,” he said. “They’re always beeetching and moooaning. Only in Italy would you see such a scene.”

He was the same guy who, along with his friend, had been in such an inexplicable hurry to get off our bus to the airport that they’d rocketed out of their seats at the first highway sign for London-Stansted, only for the driver to bark at them to sit back down. It made me certain that they were on a flight far more urgent than mine.

Instead, here we were. In line. Together.

Of course, it’s not just Italians who have trouble with Ryanair rules — soon to include toilet charges. I’d flown that KFC of airlines, where a cheap fare promises you arrival and arrival alone (although even that doesn’t always seem like a given), enough times to see both low costs and high hopes explode before passengers’ eyes. I’d witnessed people forced to check baggage at the last minute (€35-to-€50) and heard laments about the cardboard-crust sandwiches (€5). Once, I watched as a Spanish family toted their bags to the check-in counter where they were told that their €30 tickets didn’t entitle them to such ballast. They had to pay another €350 just to board the plane.

Everyone, at some point or another, got burned.

Still, there seemed to be something a bit different about how the Italians approached these flights. Or travel in general.

A couple of weeks ago, on a Ryanair flight from Edinburgh to Rome, two Italian women lined up in front of me at the gate. Each had the baggage equivalent of bootlegged goods: two separate, hefty carry-ons. One woman slung each bit of contraband casually over her jacket, tote bag on her left hip, purse on her right, and chatted away on her mobile phone. The second slyly slipped her puffy jacket on over her purse, making her bottom look ampler than her face and arms would suggest, but otherwise completely normal.

I crooked an eyebrow and tried not to feel jealous. (Why hadn’t I thought of the jacket trick?).

At the gate, the Scottish stewardess took the ladies’ tickets. “You, you get only one bag,” she said. Barely a glance at the second. “And you, please take the bag out from underneath your jacket and put it all into one bag.”

Their repacking began. So did their recriminations. Unlike the girl sobbing at Stansted, though, their insults weren’t shouted. They were whispered and implied — with all the subtlety of slamming, huffing and hand-waving.

Meanwhile, an Italian man at the front of the line decided this was the moment to misinterpret the meaning of chivalry. He promptly began shaming the stewardess for shaming the girls. Security was called. The other Italians in line shook their heads and shuffled their feet, embarrassed.

Few experiences reveal more about a culture than a painful flight. And if one theme has emerged from flying with Italians, it’s that rules seem like an unfamiliar concept. The fact that the airline doesn’t accept that rules exist to be broken brings tears, insults, or at least muttered threats. This I can say: Flying with Italians is more exciting than flying with any other nationality.

When a plane lands filled with Anglo-Saxons, there’s a collective shift in seats and continued silence. When an Italian plane lands, everyone erupts into wild cheers, whistles, and applause, as if to greet the end of a particularly spectacular live performance. And no sooner does the clapping die down than at least a handful of people immediately jumps from their seats and start trying to remove their luggage from the overhead lockers — even though the plane is still taxiing at 120 kph down the runway and the fasten-seatbelt signs remains steadfastly lit.

Yes, it gives me a headache. Yes, I feel badly for the flight crew.

But I’ve also started to feel, well, a little charmed. From the self-righteous shock at the existence of rules to the clapping at the end, it’s as if, for many of my Italian comrades-in-arms, it’s their first flight, every flight.

And perhaps, if I could feel even a fraction of the same way, I’d be more excited to fly Ryanair again. Ten-kilo limit or no.