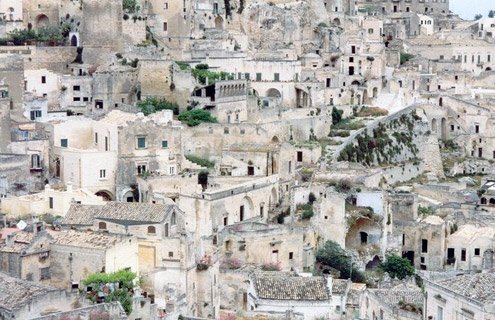 Matera: some cave home have been lived in for thousands of years.
B

y the twilight of a balmy September evening, Matera’s Sassi Barisano, one of the city’s two groups of ancient cave dwellings, can resemble a haphazardly attached puzzle piece. When the space between the homes blurs, they can seem all at once to cascade into each other, one house merging into another following the downward slope of the hill. How people move around is impossible to know because the “roads,” which are stairs, are hidden by the crevices. The ensemble of inclined homes is like an organic thing that has somehow grown from the rock itself, both with and without human influence.

Matera is the best-known city in the small, southern region of Basilicata, located in the arch of the Italian boot, a hard geography long associated with profound poverty. From Bari, the way to Matera is over a flat, dry and hostile landscape littered with rocks that seem to dare anyone or anything to put down roots.

Closer to the city, the stray rocks become large plateaus and canyons where water flowed in the prehistoric Paleolithic era. The existence of water — a stream known as the gravina — is the central reason why otherwise inhospitable Matera has supported a population for more than 15,000 years.

Fifteen thousand years of continuous habitation is a nearly unimaginable concept. Consider this: some locals live in the same homes once occupied by their early human ancestors. It is this legacy that makes Matera’s two groups of sassi — the early Sasso Caveoso and the later Sasso Barisano — otherworldly in a literal way.

The scenery reminds me of Matmata in Tunisia, another town of troglodyte heritage. In Matmata, people dug homes from the ground, with families living in craters (George Lucas choose Matmata as a location for parts of the original “Star Wars.”). In Matera, residents dug horizontally into the soft rock, or tufa, creating layered terraces that down the sides of the hill. Over time, facades were added to the caves so that that they began to almost look like conventional homes, at least from the outside.

There was enough space and clean water to support residents until the 19th-century, when the two sassi districts decayed into overpopulated slums, many infested with malaria. Carlo Levi’s 1945 novel “Christ Stopped at Eboli,” about his time in Fascist exile brought attention to the desperate local living conditions. Levi’s symbolic point — that Christ failed to make it further than Eboli, a city well north of Basilicata — was that the Italian neglected south had been left to its own devices.

Though Levi’s book was a bestseller it brought few improvements. On the contrary, just after World War II, the government forced mass evictions, viewing the destitute sassi as a blight on Italy’s tourist image. Its residents were forced to relocate to housing in the newer parts of Matera. For decades the ancient homes lay empty.

The sassi returned to life in the mid-1990s, when Matera was named a UNESCO World Heritage site, and international money, with pre-crisis support from the European Union, began rolling in. Now, both sassi districts are considered chic.

Getting lost in the sassi is among the joys of any visit to Matera. The winding stairs and blind corners take you up, down and around again. There are also the early churches of Santa Luce alle Malve and Santa Maria de Idris, both in Sassi Barisano. Like the houses, the churches were cut from the rocks. Unlike them, they were ornately lined with brilliant frescoes — some of which remain. The eerie, paint-chipped eyes of the remaining saints stare out wide-eyed, as if they’re glad to have survived.

Two of the best meals I’ve ever had in Italy I got in the Sassi Caveoso. At Trattoria del Caveoso came an appetizer with so many dishes they cluttered the table. Following this feast of fresh cheeses, meats and vegetables came a bowl of Crapiata, the city’s traditional soup — a subsistence meal once made and consumed by the whole neighborhood, as owner Nicola explained (the soup’s name is believed to derive from the Latin word crupula, which means drunkenness). One family added chickpeas, another barley, yet another some potatoes, after which all would all sit down to eat.

The next night’s meal was at Soul Kitchen, run by two brothers who are as round as they are jolly. After dinner, the eldest took our group of five women on a tour down through the ipogeo, the central part of the cave that recedes into the hill on a downward tilt.

At the bottom, carved into yellowish stone, was a cross apparently used to tell the time: the sun shone through a hole above the cave’s doorway at noon, angling down and illuminating the cross. The slant of the caves was intended to get maximum usage of sunlight, essentially the only “technology” the residents had at their daily beck and call.

Matera’s people exuberant. Maybe it’s the rebirth of the sassi. During my four-day stay, the town hosted a photo exhibition, a candle-lit night, a women’s literary festival, and the Basilicata Border Games (a youth game festival to help promote Matera’s candidacy for the 2019 European Capital of Culture Award). Artisans were busy selling handmade goods. Bars and restaurants were buzzing on weekend nights.

Morning was another story: all birdsong and the quiet of wind and voices. All of which confirmed my first impressions: Matera is a hard slice of paradise.

— From Rome: Fly to Bari on Ryanair (45 minutes) or take Trenitalia’s Freccia Argento train to Bari (five hours; €50). In Bari, change to the Ferrovie Appulo Lucane (FAL) that runs from a small station located off Corso Italia. The ticket is about €3 and the trip lasts 90 minutes.

— L’Albero di Eliana is a one-room bed and breakfast with a very gracious hostess, Eliana of course. Her B&B in the Sassi Caveoso is a wonderful and quiet place to start and finish your day. She also serves among the freshest breakfasts I’ve had in Italy.

— Soul Kitchen is a new restaurant at Via Casalnuovo, 27 in Sassi Caveoso. It has modern decor and serves traditional food with a refined twist. The owner is one of the most outwardly happy people I’ve ever met.

— Order the antipasto at Trattoria del Caveoso on Via Bruno Buozzi, 21 and get portions suited to kings or queens. The specialties are delicious local staples, including Crapiata soup and cavatelli pasta served in the cave.