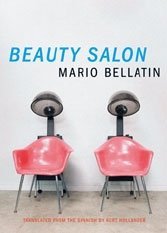 By Mario Bellatín, translated from the Spanish by Kurt Hollander

The narrator of Bellatín’s slight but insidious parable is a cross-dresser who runs a beauty salon-turned-hospice in a never-named city as a plague gradually decimates the population. In his place appropriately called the Terminal, he offers a “quick death under the most comfortable conditions,” absolutely no priests or nuns allowed.

His fascination is with fish, which he assembles in many aquariums, doting on the idiosyncrasies of different species. They seem easier to care about than his wounded patients.

But then the fish begin to die. At the same time, their illness keeps them safe from predators. “The sick fish attacked by fungus became sacred and untouchable” and “sick fish were always respected.” For Mexican novelist Bellatín, a self-styled minimalist who once attended seminary school in Peru, disease levels the playing field. Gay, poor, religious and frivolous are anonymously pooled together. “Death has long believed it has the liberty to do as it pleases in the beauty salon…” As well it should. The secular leveling of the playing field makes for deep helplessness but also creates pride; an odd couple that Bellatín insists must learn to live (and die) together.