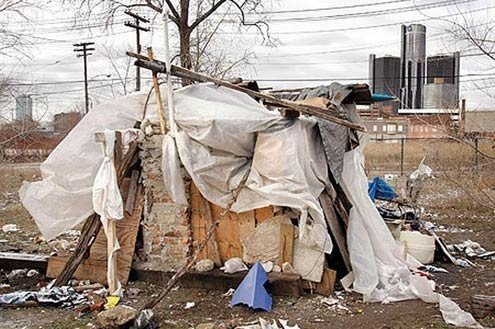 Decrepitude and hope in one urban package.
&

#8220;Your father was born right there,” my mom said as we slid down the highway toward Detroit’s midtown. She pointed at Henry Ford Hospital, a looming brick building built in 1915 with model-T money.

A few minutes later I inched our SUV into the crosshairs of a wide, fast street, futilely trying to see past a set of oversized construction vehicles blocking both lanes of westerly traffic on the busy five-lane street. The work crew milled about, apparently fixing something. Why wasn’t one of the construction workers directing traffic around the logjam? The answer, I thought, was “Welcome to Detroit.”

A squeal, a swerve, and some angry honking later I swooped around the trucks and saw the root of the problem: a non-functioning traffic signal. “Aaah, Detroit,” sighed my nostalgic mom.

It felt somehow appropriate that our first brush with the city would involve a high-risk situation induced by a combination of poor management and a lack of city funding.

Our next stop was the Detroit Institute of Arts, a sprawling white building at once austere and classic, marbled, elevated, arched and pillared. Charmingly, we faced none of the parking challenged presented by New York’s MoMA or the Art Institute of Chicago. I found a two-hour metered spot directly outside the museum’s front doors and fed five quarters into the meter before we realized it was broken.

I pulled back into another spot, reflecting on the irony of a failed city, a place that has plenty of parking spots but nowhere to park, and put in a test-nickel. I then emptied the last of our change.

We’d gone to Detroit for the Faberge egg exhibit, and all around the museum complex were banners promoting it. My mom lingered to study each one as I headed to the museum’s main door. That’s when I felt it: the incredulousness that came from the resistance to my pull.

Then I saw the sign: “Museum Hours: Monday and Tuesday, Closed.”

We then walked next door to the baroque and embellished Public Library. This time my mom laughed aloud, “Well, they can’t close the library on us!” But when we got close, wondering about the treasures inside, we found another sign: “Library Hours: Closed Sunday, Monday and Tuesday.”

What did Detroit have against Tuesday? So we decided to brave the sunny 20-degree day and tour the neighborhood on foot.

My mom was curious about what about the city’s recently burgeoning Midtown, now seen as a haven for entrepreneurs, artists, and a host of generally interesting twenty-somethings. As a student who with luck will soon earn a PhD in an obscure humanities field, I was curious about Detroit-based Wayne State University. A foot-in-the-door to academia is always useful and I’d recently discovered that Wayne State had a fairly significant Italian department. Maybe I could be among the few Italian PhD graduates interested in living in the city.

What stood out on our walk was Detroit’s eclectic aliveness: a Diego Riviera mural followed by a planetarium, a run-down Church’s Chicken Shack, and a vegetarian bistro. Then came the glass and metal Wayne State student center, a Montessori school, an artists’ market, and a dozing homeless congregation (and not far off violent screams that produced a drunken mid-intersection fisticuffs.)

These were pockets of local culture demanding the right to exist. Across the street from a partially burned out graffiti-lined hotel, with soiled mattresses, squatters, and glassless windows, was a bakery growing its own herbs in hoop houses and advertising a history of the Cass Corridor neighborhood beside a display of “I heart Detroit” t-shirts.

The joint beauty and the threat of Detroit are in the way they don’t lord commerce and capitalism over the heads of its visitors. Many of its most beautiful buildings are now functionless, empty, architecture for architecture’s sake. The city can feel old, halted, and even ghost-town-like. Yet it can also serve up amazing sights, like the bootlegger paddling a low-lying boat across the Detroit River or a 1955 Ford Thunderbird appearing out of the dangerously opaque steam parked over manhole covers all over town.

Detroit scares people, both those who know it and those who don’t. But others sense in it a rare opportunity to be part of a growing and building process, to live on the crusty edge rather than in the sponge-soft middle.

Detroit is a city that artists and entrepreneurs can afford and where a new generation has the space to make its mark. It is the most perfect of hopeful paradoxes: A bleak town with only one direction left to go in.