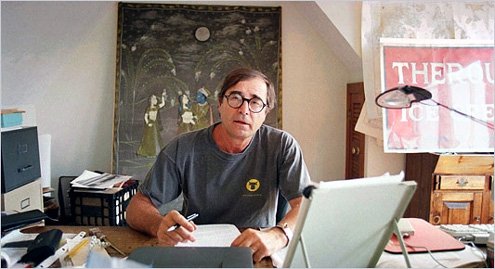 hat a title. What a hook… for a book that won’t disappoint. Paul Theroux hops the rails again. Thirty-three years after his hugely successful travel diary, “The Great Railway Bazaar,” Theroux decides to-quite literally-follow its tracks. Bringing the reader along. “Ghost Train to the Eastern Star” is a brilliant ride, and read.

NOW THINK BACK A SEC: Remember how his 1973 train trek between London and Tokyo revitalized a senescent travel-writer market. And opened a publishing path for a whole new generation of voyagers. Some as unlike Theroux in intent as the grandly mythologizing Bruce Chatwin.

In contrast, Theroux the non-fiction author assumes the role of innocent eye. A careful observer, scribbling directly into his notebooks. He’s a backpack and water bottle guy. Keeping on the move, by rail.

He’s not hunting museums, temples or monuments. It’s the everyday of each passing country and people that fascinates. So, 33 years on, he again boards every possible locomotive venture that links the dots. As they come up on the map. No forward reservations await; no hotels booked in advance. He’s on an adventure.

Read his punched tickets: Night Train from Ashgabat to Mary The Shan-e-Punjab Express to Delhi The Train to Pyin-Oo-Lwin.

He’s in fourth class-along with traveling clock salesmen, old ladies, and crates of chickens. He’s chatting up fellow passengers. Or making friends at the local noodle shop, where he stops before his next connection.

Admittedly, he started this repeat London — Tokyo trip with a few nagging worries. He knows how easily a later account can be marred by backward-looking riffs on the earlier passage.

Luckily, this writer carries his memories as lightly as his backpack. Minimum baggage. Theroux the traveler exists in the moment. Travel should be about “discovering the Tao of Travel… about (the voyager) disappearing.” In fact, he does “disappear.”

TIME TO QUICK-NOTE: IN THIS NON-FICTION REPORTING THEROUX IS ON A 180° SWING FROM HIS PROLIFIC FICTION. There you’ll find clever plotting, casts of dysfunctional characters, and descriptions that are splendid but overlong, simply word-thick. Theroux en route is a different writer. He becomes the omnipresent but invisible hand, with a friendly gaze at countries and their people. Illustrating both in quick, sharp strokes.

Within the gigantic urban landscape of Mumbai, Theroux sees “the spread of squatters’ makeshift camps… made of bits of string, twigs, branches, blankets…as deceptively invisible (within the city) as birds’ nests.”

Evoking with equal verve both celebrities and unknowns he underlines characteristic tics. Recounts dialogue verbatim from his notebooks. His take on Nobel winner Orhan Pamuk manages to be both sharply pointed and amiable. The Pamuk he sees is a fixedly smiling, inexorable questioner. Listening to each response, the Turkish author winks, winks again. “Good answer. Good answer,” he says.

All of this sound pretty interesting? It is. JUST DON’T LET THE NUMBER OF CHAPTERS (33) AND THE NEAR 500 PAGES TURN OFF YOUR READER LIGHTS. Each single chapter is a totally new installment. You can read a chapter at random, as stand-alone. Or start at page one and move straight through (the most rewarding choice).

For at book’s close Theroux does reach his beckoning goal, his “Eastern Star”: Vladivostok, the easternmost point in Russia, where”“the Siberian snow stands out in the great dark.”

From Vladivostok, the London return is swift Trans-Siberian Express. The backpacker’s adventure is over. And he’s learned more than he expected. Because — surprise! — the second journey was actually as unique as the first. Lots of changes along the base route. Afghanistan has closed its borders; rail lines have been reshuffled, trains renamed; cities have mushroomed. The trip itself hasn’t been a ghostly repeat experience at all.

Unhappily, Theroux discovers that the only Ghost is himself. He returns to countries he earlier visited in their first process of post-colonialism, of democratization. When there was poverty. But often hope.

Now he’s phantom reminder of hopes crushed. In so many countries he views riches beyond counting. And poverty beyond description. The economic spread as chasm.

Even so, he wants to believe there’s a better future. Haven’t so many wonderful strangers helped him on his way? Hasn’t he been received with kindness everywhere? “So is there hope? Yes. In the people.”

With this he closes his notebook. And though he claims this is an older man’s final cross-continents trek, it’s pretty likely we’ll meet him in a future travel book.

“Ever since childhood, when I lived within earshot of the Boston and Maine, I have seldom seen a train go by and not wished I was on it.”

Ever since “Bazaar,” this reviewer has seldom seen a Theroux travel book and not wished to read it.