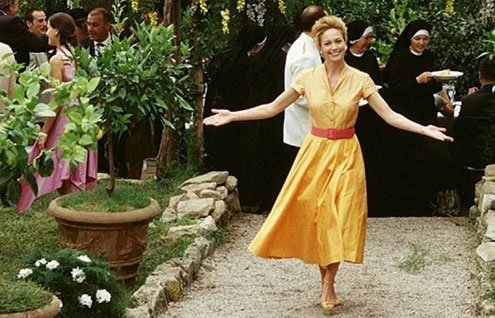 Diane Lane in "Under the Tuscan Sun": all this comes with rural life, right?
I

received an email a couple of weeks back from a 50-something woman who was tired of her life in the States. Here was this total stranger reaching out to me asking to be my friend and to give her advice about a pretty momentous life decision.

But I always respond as best I can. Call it karma. I don’t want to wake up one day in an even smaller and shitter town than the one I already live in.

Since I consider my own predicament with disinterested detachment, I can’t resist laughing whenever anyone tells me they want to live in rural Italy. Call me old fashioned, but I prefer to reside in a place where the richest citizen isn’t the undertaker.

Forgive me, I lie. In Italy, there’s no such thing as a funeral home. You get a church funeral whether you like it or not and then an unfeeling council worker dumps dirt over your grave in a loader while your loved ones are still within hearing distance. I know because my husband Giulio’s uncle died a few years ago and the beep beep beep of the reversing truck has become my own personal Pavlovian response to mortality.

Look, where you decide to die is up to you. I couldn’t care less. Of course, I have a different opinion when midlife crisis parents want to condemn their children a life of small town mindlessness.

The children of immigrants are historically meant to have a better life than their parents. Whatever that means to you, it’s not really something you can contest. I should know. My grandparents immigrated to Australia for that very reason. It wasn’t so they could bar hop McDonald’s and go shopping at 2 a.m. It was so they could one day decide they were too bourgeoisie to pick greens by the side of the road or farm guinea pigs in their backyard.

The opportunities my nephews and nieces have far outweigh anything I’ll ever be able to offer my own offspring. We don’t even have a communal swimming pool. My babies are going to be the ones at Bondi Beach in water wings well into their teens.

Why in anyone’s name would you subject a child to that? I don’t care how many times you’ve daydreamed about renovating a ramshackle Tuscan villa. Have you ever stepped foot in a small town Italian school? I don’t want to generalize, but you won’t have to worry about replacing broken cello strings or cracked iPad screens because there is no such thing as music or IT or PE or Drama or Art or Home Economics.

But that’s okay because your kids wouldn’t have understood them anyway. There’s nothing like providing them with the opportunity to learn a useless language at the expense of English. Oh, but every language is useful Elisa! No. It’s. Not. Especially when your English class is being taught by a woman who can’t remember when to use “him” and when to use “her.”

It’s at this moment that I realize I am beginning to sound like a broken record. Small town Italy sucks. Consider this my attempt at altruism. Burn your “Under the Tuscan” DVD. Write a nasty letter to the woman who penned “Eat, Pray, Love” and while you’re at it, stay in whatever beautifully globalized, commercialized and culturist city you come from.