Beasts of the Cretaceous 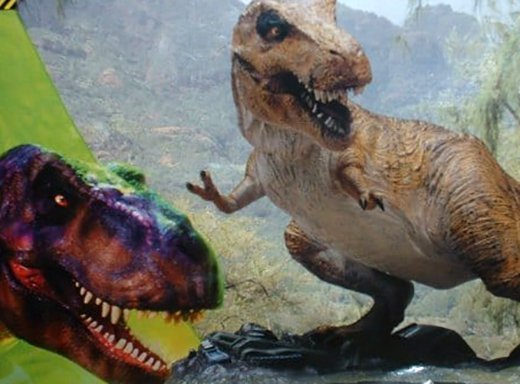 ong before I started going blind, I was an only child in a capital city. A more practical way of saying this might be to explain that I’m now a late middle-aged if still fanciful adult with failing vision.

But such a reasonable assertion betrays my magic youth, which my ostensibly grown-up self resents as much as the hindrance that sometimes passes for adulthood.

In any event, I was a child, albeit a quirky one, and children are usually beholden to the orders of their makers. So it was that an authority figure decided I should attend Sunday School.

I knew nothing about religion at age seven except that churches were old and people sat around saying nothing intelligible and looking completely sad. My mother insisted this sadness was merely respect, but I ignored her because she knew too much and therefore could not be trusted.

I went to Sunday School on Sunday, which to me made considerable sense, so at first I was hopeful. Then came God.

God had a beard and spent a lot of time in clouds often nearly naked. God had a melancholy-looking son, also with a beard, who for whatever reason couldn’t stop bleeding from his chest.

God, an unfamiliar figure, was introduced to me in a book called the Bible, which in my view was much too long and had a tediously black cover, reminding me of the way fireplace logs got on their way to ash.

This God was not a man, or so I was told, but a Creator, which was superior to a man. God had a beard and spent a lot of time in clouds often nearly naked. This God had a melancholy-looking son, also with a beard, who for whatever reason couldn’t stop bleeding from his chest, as if someone had stabbed him with an arrow. (I liked Westerns and sheriffs far more than God, but that’s for another time.)

It was explained to me that God’s son, called Christ — or Jesus to his friends — bled because he’d been beaten up and crucified by antsy Romans. For whatever (dubious) reason, this meant the son was dying for “our” sins, a bad choice of words since I hadn’t been consulted. He was dying, that is, he was resurrected and, I assumed, escaped back to his father, which made even less sense because my own father said “Good Christ!” whenever he was angry, so either he was wrong to call Christ good when he was mad or someone had badly confused the real intentions of this cast of characters.

One day a reverend took me aside to set the record straight. God, he said, was the Lord and Master and presided over all things including faith, which is what I should learn to understand because Christ had given his life to help me do so.

Christ, Good Christ, Jesus to his friends, had given his life for me? Yes, said the reverend. For all of us.

Why, I asked, intent on getting into the details, did they all have beards?

Those were ancient times, he replied. That’s when I asked him to prove there were dinosaurs around God and Christ — since ancient meant ancient — and I was sent home with a note about my “disrespect,” proof he had no response to my dinosaur question, let alone could tell me God’s view on large reptiles.

My father eventually intervened, saying God and Christ and faith had nothing to do with dinosaurs. I rejected this as disinformation, pro-God propaganda even, since everything had to do with dinosaurs, and, according to the Bible, God must have made them before he got around to his I-can’t-stop-bleeding child, who ended up commanding entirely too much attention.

My father replied that faith was a choice. I was not compelled to believe.

In fairness, I did try to balance this matter of faith with my own vision of the ancient world — but not for long. I decided that despite all this talk of bearded deities and their band of band of apostles, I would not be duped by black books filled with lizard-less legends.

My short Sunday School stint ended the day I explained my vantage point to the reverend, bringing along my own Bible, “Beasts of the Cretaceous.” Before that, I poured over all my dinosaur books until I found a large image of the stegosaurus, which, I told him, had two brains, not one, and, based on all this admiration, wouldn’t you expect God and Christ to have dozens between them? The reverend shook his head sadly, telling me only that one day my vision would not be governed by “flights of fancy.”

But even today, still no God or bleeding son in my lizard’s small sight, the fancies fly hard and large.