Beasts and their burden 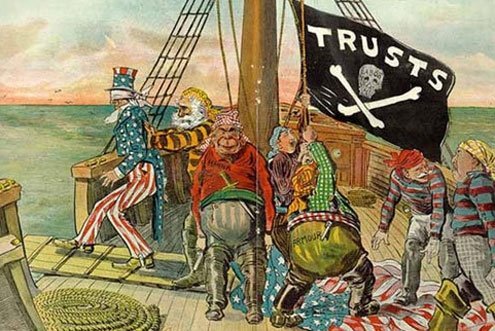 The muckraking era was relentlessly emotional, and partisan.
I

once wanted to be erudite for the sake of the word, which sounded lofty. So did the word awry, even though I couldn’t pronounce either. Vowels tangling with consonants shut me up.

I also wanted to be a writer. Or a journalist like my father, a one-time foreign correspondent and novelist who rose before dawn to absorb the news sections of three daily newspapers, the Washington Post, the New York Times, and the Wall Street Journal. When I woke — ours was a father-son only household — I’d find the dailies already open on the breakfast table, articles of interest circled in red crayon.

I’d peek but not read. I didn’t want to give my father the satisfaction of subservience. I read the sports page instead. But after he left for work and before school I’d seize on the circled articles, devouring them while keeping mum.

Our family sensibility, one small old man and one small little man, was, I understand now, implicitly intellectual — another word I barely understood at the time but I assumed was somehow connected to newspapers, magazines and words. We were also fairly formal. He stood for polite elegance that could include rage but refused vulgarity. Nothing about him, including the narrow white tie he wore daily, was casual.

Nor were the newspapers he read. They were visibly unlike the hyperbolic comics of my youth, instead rigidly black-and-white, with few images, the unvarnished antithesis of self-indulgence.

It was then that I began looking ahead to a time I might be employed by a Post, a Times, a Herald or a Journal, even a Star. To get there would be my rite of passage. Once settled in, my own perspective would be like that of the articles circled in red, detailed, passionate but even-handed. Along the way I would learn the meaning of erudite and awry, and even how to pronounce them, or so I hoped.

The intervening decades did see me join newspaper ranks, with a Star and a Today. The others I never attained. I learned how to say erudite and awry, and even learned what they meant. I moved from the casual recklessness of adolescence into a world that put a premium on emotional balance. Maturity represented the distance traveled between my outburst-hungry boyhood and a no longer boyish working self. I had to dress better and arrive on time, since my interviewers would assume I’d made good on the distance traveled between ages 15 and 25. Human resources departments did yet not exist. I was met instead by editors and publishers who were often at least twice my age. Most were not only professional but also erudite. All were careful. None were casual.

I still read newspapers avidly, though print publications are in increasing peril. The names of the more successful new publications (most of which exist only online) stomp on the staid, or try. They are called “BuzzFeed,””Daily Beast,” “Huffington,” “Gawker,” “Grub Street,” preening monikers that refresh Yellow Journalism by mocking impartiality and favoring activist-driven reporting. These shape-shifting entities are not just periodicals but loud, boastful, often adversarial trend-makers that scamper like children for minute-by-minute attention. Their yakking (now as ever a jumbled mix of sex, death and scandal) is a direct descendent of a purple prose era that all but created modern pulp fiction.

But the sensational language of Yellow Journalism, the norm between 1890 and 1910, gradually ran out of boyish steam, chastened in part by two world wars that widened the risks of adolescent fervor to include populism, bullying and real conflict. Mainstream impartiality reflected an attempt to limit exaggeration.

With global conflict passé, the Beasts and Buzzes of the new century appear to have revived a century-old crusading fervor, albeit ironically. Instinct and partiality govern their daily gravity. That’s not to say gawking and grubbing don’t contain considerable sincerity and intelligence. They do. At the same time, fewer and fewer feel the need to differentiate between self-serving, confrontational prose and the value of stiff upper lip restraint (and its annoying white ties).

The white tie planet may have ceased to exist, and may in fact have been an aberration to start with, but the tone of its aftermath is increasingly and willfully immature, uninterested in dignity, disdainful of the private, and eager to ruin secrets as a matter of self-enlarging course.

It isn’t a world I would have wished to join, let alone one I would have aspired toward, instead more like the simplistic, comic book landscape I sought to grow out of, and now one into which the visually mesmerizing but verbally impoverished digital universe can perfectly condense the whole of its unsubtle character.

What it is not, at least in tone, is adult — a word that, more even than erudite, increasingly has the ring of an artifact.