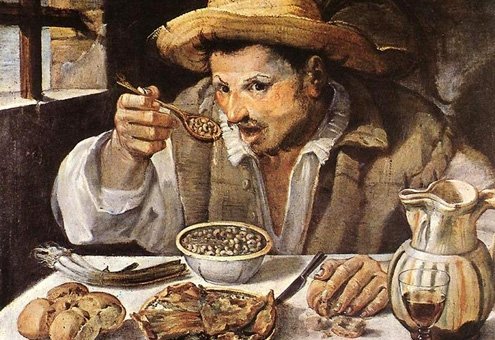 Carracci made Tuscan tastes clear 400 years ago.
A

lthough Tuscany is beef and pork country, Florentines have always been known as mangia-fagioli, or bean-eaters. Painter Annibale Carracci immortalized the Tuscan lust for beans four centuries ago. Judging from the array of beans sold at the Mercato Centrale I shop at, lust is well-served.

Though beans form the backbone of soups and stews througout the country, the difference in Tuscany may be the extent to which they find their way into the region’s most well-known recipes. Consider tonno e fagioli (tuna and bean salad), minestrone (vegetable soup), fagioli all’uccelleto (beans in tomato and sage sauce), zuppa di gran farro (bean and spelt soup), fettunta bianca (toasted garlic bread with beans, new oil and pepper) and zuppa lombarda (beans and their broth served with garlic toast).

Beans help replace meat in a diet as a protein source. Christopher Columbus discovered them in New World America and hauled back samples to Spain. Catholic Spain dutifully shipped off examples of the new treasure to the papal court in Rome. Since the pope belonged to the Medici family, he sent them off to his artistocratic relatives in Florence. Several new world foods (potatoes and tomatoes) were planted in Florence’s Boboli Gardens as ornamental plants.

Beans gradually joined spelt or farro, an ancient wheat grain used by the Egyptians and Romans, as staples of the Mediterranean diet.

Before beans, Roman Italy depended on black-eyed peas, known as fagiolo all’occhio, to create a key dish known as “puls.” Farro was at the base of “puls,” or “pulse,” a pottage of spelt, vegetables, and broad beans. Salt and farro were offered up to the goddess Demeter to ensure a good harvest during the Ides of March.

Though beans are often associated with rice-heavy poor cultures that lack meat, they have the advantage of fiber, which meat lacks. Combining beans and starches such as rice or grains can make highly nutritional dishes.

Rising bean prices reflect growing popularity and trendiness. What used to be cheap and good for you is now more expensive and coveted. Tuscan zolfino beans sell for €30 a kilo and are protected by a DOP label. The Slow Food movement has 15 kinds of beans on its “ark,” where it lists essential foods that need saving.

Classics such as pasta e fagioli, bean and pasta soup, are everywhere in Italy. In Puglia, I’ve had beans served in soup with fried pasta as a garnish. In Florence, the Ristorante Paoli offers a tuna and bean salad topped with thin sliced onions. It’s probably a variation on caviar salad and an effort to take beans to a more refined level.

Winter is a perfect time to explore beans in soups and stews.

For best results, soak the beans overnight in water so they cook faster. If you prefer, they can be slow-cooked (about 3 hours) in a crock-pot, which simulates the Tuscan slow cooking in clay pots.

Here’s the recipe for the Tuscan way:

— Do not let the water boil. Cooking time can be anywhere from 2 to 3 hours, depending on the freshness of the beans.

— Add salt in the last 10 minutes of cooking time to prevent the beans from getting tough. Taste to see if the dish is done.

You can cook this in the oven or in a casserole. Serve the beans drained, drizzled with olive oil and a twist of fresh black pepper.

Save the broth. It can make great soup or be served with the beans for Zuppa Lombarda (the beans and the broth are served in a soup bowl on top of a slice of toasted bread). Finish with olive oil and some freshly ground pepper.

— Soak the chickpeas in cold water for 12 hours, changing the water 3 times. (If you use canned chickpeas, rinse them thoroughly!)

— Cook the chickpeas in the same water for about 1 hour or until done.

— Cook the farro in lightly salted water until tender. Do not overcook either the chickpeas or farro.

— Finely chop the garlic, basil, sage, rosemary, chili flakes and oregano. (Most recipes in Italy are passed on by word of mouth and measurements are not specific. Use fresh herbs and tomatoes in tiny amounts, pinches, as they are intended only to accent, not overpower the truffles.)

— Lightly sauté the herbs in olive oil, and then add the chopped tomato bits.

— Add the drained chickpeas and farro, drizzling with a bit of broth until cooked.

— Off the flame, stir in the truffles and serve with slices of toasted bread.

This salad is just with sautéed mushrooms in place of truffles.

— Parboil farro or pasta in salted water. Then drain.

— Purée half the beans and put the remaining whole beans in a soup pot together.

— Heat, adding more water if soup seems too thick. Add farro or pasta to soup and heat together.

— In a small pot, heat 1 tbs of olive oil per person and 1 tsp of Tuscan herbs (chopped rosemary and sage), just to warm. Drizzle into soup.