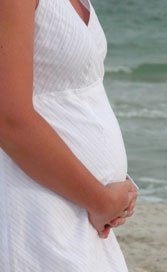 am not an exhibitionist. Nor am I a wallflower. I’ve never been morbidly obese or stick-figure skinny. My sexy looks have never stopped traffic but I think of myself as moderately attractive on a good day. I do have a positive self-image and a beautiful set of gams. Show me a woman who doesn’t have body issues and I’ll show you a man.

Post-baby numero uno my body was not too shabby. I bounced back and slimmed down quickly. I secretly relished the fact that I’d recovered nicely and looked at my figure with new pride. When I became pregnant again, I crossed my fingers that my body would respond as it had in round one.

Second pregnancies (and those that follow) usually bring the weight on faster. I wasn’t spared. I chunked up immediately. My cleaning lady — a lovely and intelligent woman whom I adore and is also pregnant — decided she had to speak up. “You are already a little fat — and it’s so soon,” she observed in her Romanian-inflected Italian.

You’re not paid for your honesty was what I had in mind to tell her, but I chose instead explained why I thought I might be more chubby than she.

“Will you go to the sea this summer?”

“You aren’t ashamed or embarrassed?” She pointed to my protruding pancia. “I’m embarrassed.”

I hadn’t thought about it. I did then.

I grew up spending summers at the beach. I remembered seeing pregnant women wearing ample one-piece suits — like belly burqas — to mask their state. “Good move,” I recalled thinking.

Curious, I went to my closet and rummaged through my bikini collection. I tried one on and twirled in front of the full-length. And something sort of magical happened.

I liked what I saw!

Okay, my non-existent derriere was still an issue… but the baby growing inside me actually gave me reason to say, “Damn! I look good!” My belly practically screamed, “Hey! Look at me!” Its existence dwarfed my flaws.

Was I going to the beach this summer? Hell yes!

For the first time in my life I had a great excuse to be overweight and get compliments at the same time. My beach bag was packed!

But my “beach-blanket-bimbo” plans, Gidget-style, came to a screeching halt in April when I was put on bed rest. That lasted through the first week in July, when at 33 weeks I was past the riskiest of stage of my gestational business.

“Can I go to the beach?” I asked my ob-gyn like a fifth grader extending a field trip permission slip, hoping for a signature. He agreed but insisted I get my share of rest while at the shore.

My sister-in-law had a beachfront rental and invited us for the weekend. I was giddy. I packed a bag for Oedipus and one for me. Marco did his own packing — I’m not his mother. Off we sailed off down the Via Pontina for 48 hours of freedom and pre-cancerous sun bathing.

I practically ran to the beach. I flung off my clothes and soaked up the sand, sun and salt water. Marco and the baby flailed around in the water and I floated. It was bliss.

On the shore, I lounged and passersby had lots to say.

According to Italian folklore, boys cause weight gain only in the abdomen, while girls “steal” their mother’s beauty.

Okay, so no one came out and screamed “HOT MAMMA!” but my point stands: No one had ever gone out of their way to flatter me in a bikini except at that moment, when I was 35 weeks pregnant and looked like an overfed tic ready to pop. It was priceless.

Later, though, as we drove home (along with 47 million other weekend warriors), I paid the price: Contractions. I breathed and tried to stay calm as my son slept and Marco was stuck driving at a snail’s pace. Every 10 minutes I writhed in pain and demanded to know how many kilometers were left.

We managed to make it back to Rome and to the hospital. The contractions finally stopped after five hours and some meds. By 4 a.m. we were finally in our own beds.

“It wasn’t worth the risk,” mused Marco after our beach outing.

“Speak for yourself,” I replied, “It was so worth it.” I knew I’d just received my first and last dose of two-piece kudos — at least in this lifetime.